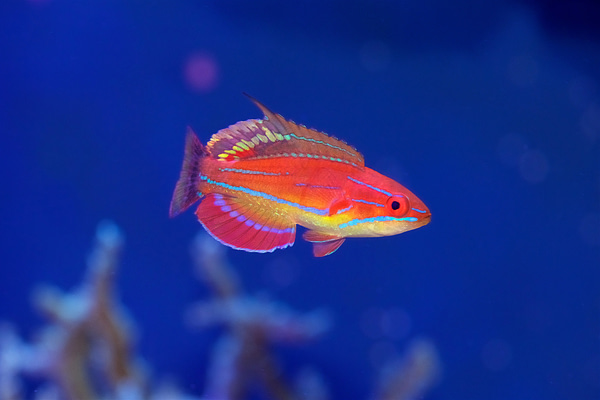 This McCosker’s Flasher Wrasse is a stunning safe reef wrasse that will make a splash in your home aquarium. This tough wrasse species are able to adapt well to home aquariums that are established and are a stunning and lively addition. The vividly-hued male McCosker’s Flasher Wrasse is mostly red/orange with blue horizontal stripes that complement their yellow stomach. The dorsal fin of orange is accentuated by yellow, red blue, and one elongated Ray. A stunning, red band along the orange fin produces a stunning and vibrant color scheme. Female coloring and overall appearance are muted. Females also don’t have massive dorsal or anal fins. The McCosker’s Flasher Wrasse requires a 55-gallon aquarium (or bigger) with a lid that is tight as it is a jumper. It is often found on areas of reefs that slope down as well as rubble zone, the McCosker’s Wrasse can be found swimming at the bottom and tends to create small-sized groups in which males swim around between females in groups. The color of a male adult intensifies when he is courting and he can flash the fins in order to attract females. We suggest just one male for each aquarium display.

McCosker’s Flasher Wrasse diet should comprise mysis shrimp that are vitamin-enriched and frozen as well as vitamin-rich brine shrimp frozen in brine, and other meaty meals, as well as an excellent seafood flake, and pellets.

The McCosker’s flasher wrasse is an extremely hardy species of wrasse that is able to adapt to existing aquariums at home. The brightly colored male McCosker’s Flasher Wrasse is predominantly red/orange with blue horizontal stripes, which complement their yellow stomach. The dorsal fin of orange is accentuated by yellow, red, blue, and an elongated single Ray. A beautiful, red strip along the orange fin produces a stunning and vibrant color palette. Female colors and overall appearance is more muted. Females also don’t have the dorsal or anal fins. It is believed that the McCosker’s flasher Wrasse needs a moderate or larger tank with a tight fitting lid because it’s a jumper. Most often, it is found on the reef’s slopes or rubble areas, McCosker’s Wrasse is often found at the bottom, and it tends to make small groups, where males swim around between female groups. The colors of a mature male are intensified when he is courting and he can flash his fins or flare them to draw females. We recommend that only one male is placed for each aquarium display.