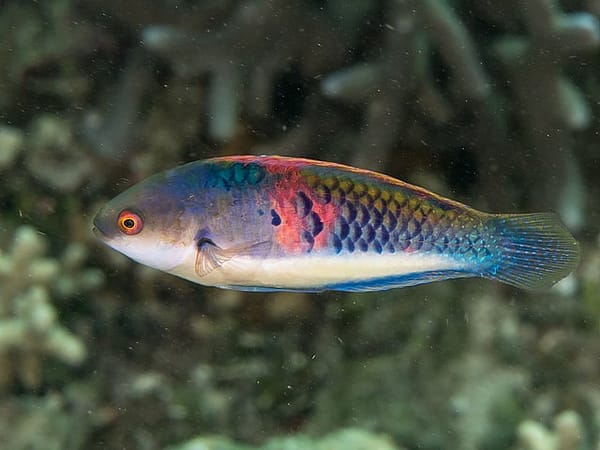 The Fairy Katherine can be described as easy to handle, simple to care for, and is a good value. The wrasse that is priced reasonably has lots of contrast and color with its white belly with a silvery-white color and a boldly colored upper part that displays black, red, purple, and yellow highlights. Similar to most species of wrasses the female Katherines Fairy Wrasse is more muted in its hue.

The serene Katherines Wrasse is a coral-safe active swimmer who can be found in every corner of the aquarium. In addition, it is recommended that the Katherines Fairy Wrasse requires a larger tank of a minimum of 90 gallons. It must be filled with coral and rock structures for exploration and hunting of small invertebrates as well as pods. Because all wrasses are jumpers make sure to have a sturdy cover for your aquarium.

The Katherines Fairy Wrasse diet should include thawed mysis shrimp vitamin enriched, vitamin-rich brine shrimp that has been frozen or thawed, and other meaty meals as well as a good marine flake and pellet diet.