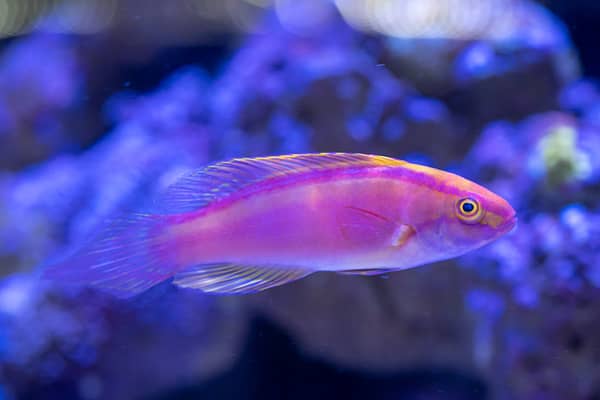 A Rose-Band Fairy Wrasse also known as the Fairy Wrasse is a peaceful fish that will add both activity and color to your fish-only aquarium. Adult male who are adults are brighter and more flashy than their female counterpart.

The ideal setting for the Red-Band Wrasse is a well-established marine aquarium with a minimum of 70 gallons of aquascaped with a large amount of live rock as well as ample open areas to swim in. This Red-Fin Wrasse is considered to be reef-safe and should be kept in an aquarium with peaceful tankmates. An aquarium that is covered is an absolute requirement since wrasses have been considered to be jumpers.

The rose-colored Fairy Wrasse Diet should consist of mysis shrimp with vitamin enrichment that is frozen or frozen and vitamin-rich brine shrimp, as well as other meaty meals together with a high-quality marine flake and pellet diet.

In the dozen or so commonly seen fairy wrasses, the rare rose banded fairy wrasse Cirrhilabrus roseafascia, isn’t among the species. It is relatively new to the known fairy wrasse species being first identified in 1982. Although it has a wide distribution, which spans Fiji, New Caledonia, Palau, Samoa and Cebu Philippines The rose-banded fairy wrasse isn’t commonly found in a particular location, though Cebu is most likely to be the source for collecting to be sold in the market for aquariums. This exceptionally beautiful species actually comes to us through Australia. Coral Sea, Australia.