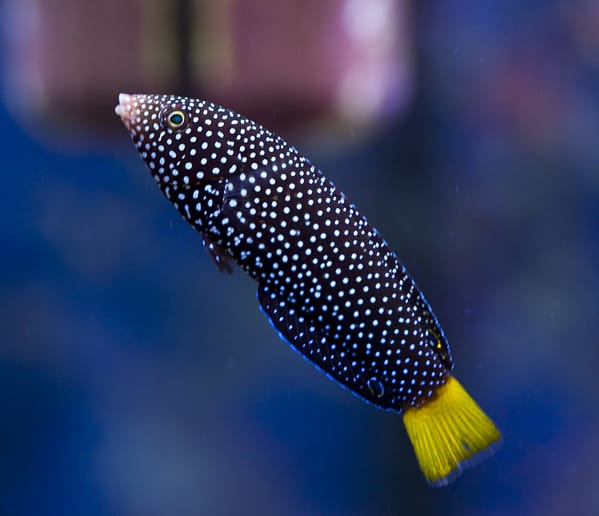 The Yellowtail Wrasse is also referred to as the Yellow-tail Tamarin, or Spotted Wrasse. It has a black body covered with varying sized white dots. The tail is bright yellow.
It requires a 50 gallon or larger aquarium with a 2 inch layer of live sand in which to bury itself. It is a jumper, so a secure lid on the aquarium is required.

The Yellowtail Wrasse may be very difficult to keep in an aquarium due to its feeding habits. When first introduced into the aquarium, live saltwater feeder shrimp should be used to entice this fish to eat. It eats very small invertebrates (amphiopods) that grow on live rock. The diet should also include live, small feeder shrimps (brine, mysid) and finely chopped marine meats.

Please note: We guarantee that ALL aquaria species we offer will arrive alive and in good condition. However, because of the increased level of care required for this particular species, it has been designated as “Expert Only.” This species is recommended only for the expert aquarist, zoo, or research institution. Expert Only aquatic life is exempt from our extended guarantee after their arrival.

This fish species is throughout tropical waters. It is primarily found in Pacific waters as well as those of the Indian ocean. It is not considered to be an endangered species because there is no evidence in the past to indicate that its numbers are declining. This species has a native range of the countries situated on both the east and western shores of the Indian ocean boundary and also the central, east, and western regions of the Pacific ocean boundaries. It is found in a depth range between 3 to 60 meters in depth and is considered to be a demersal species due to its affinity to lower levels. It can be found in a variety of habitats since it can be found in soft and hard coral zones. It can also be seen in sea-facing coral reefs, as being found in areas that have an abundance of sand and limestone. This particular species of wrasse can grow to the maximum height of 9.8 inches.

It is an carnivore species that feeds on macro-invertebrates such as sea urchins, pyramide snalis, and flatworms that are found on ocean floors or in bottoms of habitats that are contaminated by sediment. Zooplanktons are also a significant component of the diet of the wrasse. In captivity, its diet should comprise of seafood that has been minced finely, live mysids as well as brine.

It’s found in tropical waters, notably the Indian Ocean and Pacific ocean waters. It is widespread in regions like the Great reef, east, central, and west pacific as well as the west and east Indian oceans, Indonesia, The Red Sea as well as Australia.