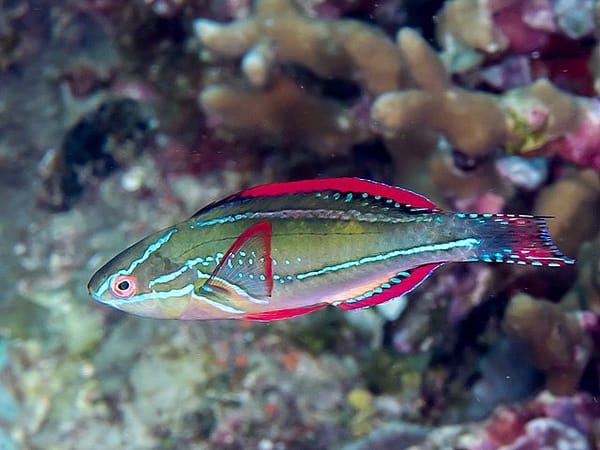 Don’t miss the opportunity to purchase one of the latest and most stunning new additions to the aquarium hobby: this Hooded Fairy Wrasse. The first time it was described in 2003, Cirrhilabrus bathyphilus is considered to be one of the sought-after deep-water wrasses in its Genus.

Also known in the Coral Sea Wrasse, the Hooded Fairy Wrasse is distinguished by its unique pattern of colors that span between pink, rose yellow, and orange, with black-purple bordering its dorsal as well as tail fins. Males and females from this kind of fish are similar in color, however when they’re courting, males is more intense in color. The colors can vary based on the mood of the fish.

The Hooded Fairy Wrasse is a peaceful active fish that will add color and energy to a reef or fish-only aquarium that is 70 gallons or more. It won’t bother any corals or other invertebrates which makes the perfect fish for an aquarium for reefs. One male is able to be kept in an assortment of females who are introduced before or in the same manner to the male. The wrasse loves to jump, and it is suggested to use a canopy that is tight fitting.

When the fish is first introduced to the aquarium Live brine shrimps or mysis frozen can be used to lure the fish to take a bite. Foods should comprise an assortment of frozen enriched mysis, brine shrimp frozen, and various other meats from the marine.

The Hooded Fairy Wrasse is also known as Coral Sea Wrasse, the Hooded Fairy Wrasse is distinguished by its distinctive pattern of colors that span from pink, rose, yellow, and orange, with the black and purple edging that covers its tail fins and dorsal fins. Males and females in this kind of fish are alike in color, but when they are courting, males exhibits a greater intensity of color. The color of the fish can change depending on the mood of the fish. A Hooded Wrasse is a peaceful active fish that can provide both activity and color to a reef or fish-only aquarium. It is not a nuisance to corals or other invertebrates which makes it a great fish to keep in an aquarium with a reef. One male is able to be kept in females that are introduced before or even at the same time to the male. The wrasse is known to jump, and it is suggested to use a canopy that is tight fitting.