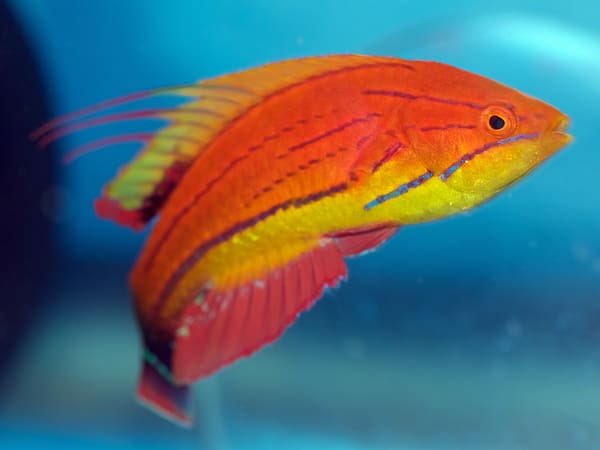 This wrasse needs 55 gallon or larger tank with an easily-fitting lid as it’s a jumping. Grouping is acceptable and usually recommended, since females are more likely to inspire males to put on colourful display. Females must be introduced to tanks first. The fish is frequently harassed by other fish. Therefore, the Carpenter’s Flasher Worm should be the first fish to be introduced into the aquarium. It is recommended to keep it with calm tankmates.

It is known as the Carpenter’s Flasher Wrasse is orange with blue vertical stripes when it is an infant. As the fish matures and turns into an adult, its coloration turns yellow, with broken horizontal blue lines. The dorsal fin is adorned with three rays that are elongated and bright red with blues and yellows. The colors of adult males are more intense during courtship, while females’ looks and coloration are more subtle. Females do not possess huge dorsal and anal fins. The Carpenter’s Flasher Wrasse requires an aquarium that has a tight fitting lid as it’s a jumping fish. Grouping is recommended and frequently recommended as females can help the male to make impressive display. Females must be introduced to tanks first. It is often harmed by other fish, so this species of wrasse needs to be the first fish to be introduced to the aquarium. It is recommended to keep it in peace with tankmates.