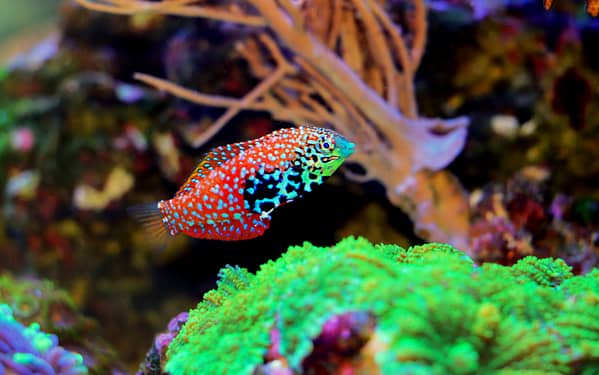 Blue Star Leopard Wrasse is sometimes referred to by the name Vermiculite Wrasse or Divided Wrasse It has a distinctive color pattern. The juveniles and females have white, pearly body that is a mix of scattered yellows, oranges, and browns. They also have light blue spots all over the pattern, with a massive blue to black spot addition on their stomachs. Males are bright brilliant neon green and blue with black lines in stripes that run along the length of their bodies.

As with the other members of Genus Macropharyngodon the fishes need a sandy substrate that is fine as they will bury themselves in the night to guard themselves. They require a well-established aquarium since they seek out small crustaceans during the day.

Leopard Wrasse can be a challenging fish to adjust to an environment in captivity However, with the help of experienced reef aquarists who can provide these fish with the right care and the right environment, they can flourish and create a stunning display. It is recommended to introduce Leopard Wrasse into the aquarium prior to when any other larger or active fish are brought in, to give them ample time to get used to and adjust to their new surroundings and begin feeding on freshly prepared food items effectively. If you want to maintain the population of these fish, introducing them in the same display is the best option. Similar to other Labroids, these fishes are able to switch sex. For instance, the dominant fish in the group could change into fully male.

This unique wrasse can be located along the East African coast in the Western Indian Ocean. The healthiest fishes originate from the Maldives since this is the only place that we can offer our Blue Star Leopard Wrasse.

The Blue Star Leopard Wrasse’s diet should include mysis shrimp vitamin enriched frozen, vitamin-enriched brine shrimp that are frozen, as well as other meaty meals, along with the highest quality sea flake and marine pellet food.

Please note that we promise that ALL aquarium species we sell will arrive in good health. However, due to the greater degree of maintenance required for this particular species, it was designated “Expert only.” This species is only recommended to the aquarist who is an expert or zoo research institution. Expert only aquatic life is not covered by our warranty after arrival.

The Blue Star Leopard Wrasse could be the perfect option for the experienced aquarists, with its calm behavior and the adult-sized size, 5″ and its intricate pattern makes it a favorite among enthusiasts. They can be incorporated into an aquarium in a group that is three to more. As with other wrasses they are able to switch sexes, which means that the fish that dominates the group will change to male. They favor aquariums with established tanks which means they are able to catch small invertebrates within their sandy bottom. It is recommended that your aquarium is fitted with an elongated lid as they have been known to leap out.

The diet of these fish should consist of frozen meaty food items including marine pellets, flakes, and marine food. At times, a seaweed strip is recommended to add variety to their diet. The wrasse is high metabolism, so they are recommended to eat a variety of small meals, rather than two big meals per day. Females have a body with white color and alternate patterns of brown, yellow, and blue.