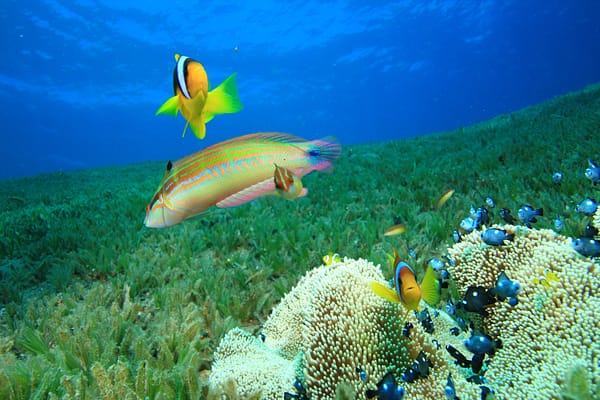 The simple-to-strike Grey Head Wrasse, or Threespot Wrasse, is characterized by three white lines running along the sides of its head and three black spots on its back along with three false “eyes” which run along its dorsal fin from an additional one on the tail of females and juveniles. Male Grey Head Wrasses, have vibrant blue stripes across their face , and red spots with orange across their bodies.

A 70-gallon or bigger aquarium that has a lid that is tight with a 2-3″ sandy bottom that you can hide in if you are scared, and other tranquil wrasses including the species it is, are an ideal setting.

It eats fireworms as well as pyramidellid snails. It also protects the corals and clams they do not harm. The larger species can devour smaller ornamental crabs and shrimp. It also may devour birdseed dusters as well as wild shrimp flatworms, and tubeworms. It can also eat parasites from tank mates. The diet should contain vitamin-rich frozen mysis shrimps, vitamin-enriched brine shrimp, and other meaty food items, along with an excellent sea flake as well as marine pellets.

The simple-to-strike Grey Head Wrasse, or Threespot Wrasse, has three white lines either side of the head as well as three black spots along its back as well as three false eyes running from its dorsal fin from a fourth on the tail in females and juveniles. Male Grey Head Wrasses, have bright blue stripes on their faces, with red and orange spots throughout their bodies.