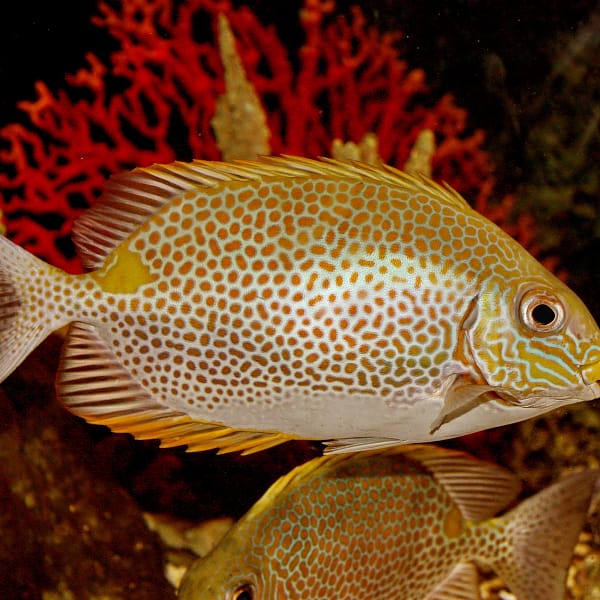 It needs an aquarium of 180-gallon or more. It is a peaceful species unless it is housed together with other Rabbitfish. It may be placed with fish with more aggression and may be placed in pairs. The predators of this fish will usually avoid it because of its spines that are venomous which it could raise when disturbed. It is important to be cautious when handling the fish to be safe from being injured by its venomous spines. Rabbitfish are usually reef-safe provided they are fed properly. If not, it’s possible for them to nibble at and eat certain species of lps and soft corals.

Its diet is comprised of diverse fresh greens and algae. It can nip and consume some hard and soft coral polyps.

The Gold Spotted Rabbitfish (Siganus punctatus) Also called The Gold Spotted Spinefoot, is an ocean-based, tropical marine fish found in the western part of the Pacific. This species is located in the eastern part of the Indian Ocean south to Australia all the way to Indonesia and all the way to the South China Sea. A large portion of the individuals who are able to enter the marine aquarium market are taken by fishermen from within the Coral Sea. The Gold Spotted Rabbitfish is closely identical to Brown Spotted Spinefoot (Siganus stellatus).

This fish is an algae eating machine that is most at home in an aquarium that is mature and has lots of live rocks. Add to the diet fish food items that are herbivore and meaty, like Krill, table shrimp that is raw as well as clams, squid, and mussels. Making sure that all rabbitfishes are well-fed (e.g. frequent feedings throughout the day) will make a huge difference in keeping them from feeding on your coral (especially the soft, leather-like corals, as well as corals with polyps that are large).