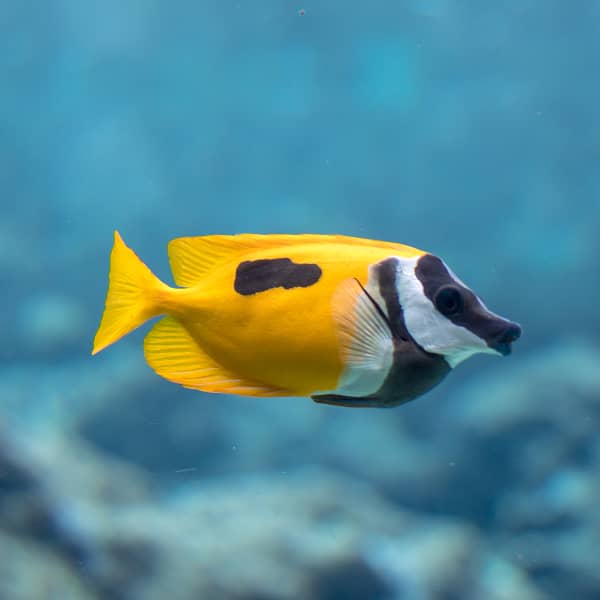 The Foxface Lo Siganus vulpinus, also known as the Foxface Rabbitfish, has a very unique body color. It has a mottled bright yellow-brown body with a dark chest. The face is very light in color and speckled on the lower half. They are a very hardy fish, and are great additions to the newly-established tank.

It may reside in a 125 gallon or larger aquarium. It is a very peaceful species except when housed with other rabbitfish. The Foxface Lo may be housed with more aggressive fish. Its predators will tend to leave it alone because of its venomous dorsal spines. Rabbitfish are generally reef-safe if they are well fed. If not, it is possible for them to nip at and consume some species of LPS and soft corals.

The Foxface Lo diet consists of a variety of fresh vegetables and undesirable species of algae. It does nip and possibly eat some soft and hard coral polyps.

It is a unique animal. Foxface Lo has a unique body color. It is a mottled yellow-brown-colored body, with a dark chest. The face is pale in color and has speckles on the lower portion. They are extremely tough fish and make great additions to the aquarium that has just been established. They can be found in a large aquarium, and usually reaches 7 to 9 inches in length. It is a peaceful species unless it is housed with other rabbitfish. The Foxface Lo can be housed with fish that are more aggressive. The predators that it is surrounded by will ignore it due to its venomous dorsal spines.

It is easily recognized by its distinctive shape and coloring the long snout (typical in the family of rabbitfish) and a striking yellow body. The head is white with a huge dark black triangular shape on its back and a black diagonal Ocular band running from the initial dorsal fin’s spine all the way up to the cheek, and a narrow white blaze that runs along the side of the snout. The distinctive head markings are the basis for some of Foxfaces’ most common names badger fish.

They maintain this bright hue throughout the day, and in the evening (or when they are stressed) they are able to transform into a smudged darker brown/gray/white color. In addition to changing colors and appearance, they can be found at odd places like in the corners of tanks, perched upon the coral, in a vertical position along rock or coral, or even molded or curving to follow the contours of the rock. The dramatic changes are employed to disguise predators. When they awake or when they are not stressed, their vibrant coloration quickly returns. Foxface’s are adept in camouflage that they are able to be overlooked by aquarists but still be in the eye of the observer.

While Foxface’s can be paired with other fish species, no matter how big, they could be stressed out with any other fish which routinely harasses them. Tangs from the Genus Zebrasoma can sometimes attack their Foxface, Tangs will see the Foxface as directly a food rival. If you intend to keep the Foxface along with Tangs it is recommended that you introduce the Foxface at first into your fish tank.

While they are often found in pairs throughout the ocean, however, only one specimen is required to be kept in an aquarium unless the tank is very massive.

Being an omnivore you may find it difficult to determine what Foxface will not eat. They are extremely hungry and can be aggressive eaters when it comes to mealtime. They are a bit of a scavenger. Foxface Lo will accept a large variety of meaty seafood and almost every plant it comes across. Apart from eating algae and other marine life, the Foxface is a fan of a wide variety of nori (dried seaweed) as well as frozen spirulina, and even blanched green vegetables in the diet.

The Foxface is considered semi-reef safe, it is periodically reported to nibble at corals (they appear to be looking for button polyps and zooanthids) when they are hungry. But, if they are fed properly, Foxface usually won’t harm your corals.

The specimens that look as if they are pinched behind the head in the dorsal part of the head are malnourished.

Inhabitants of the Indo-Pacific shallow lagoons and reefs