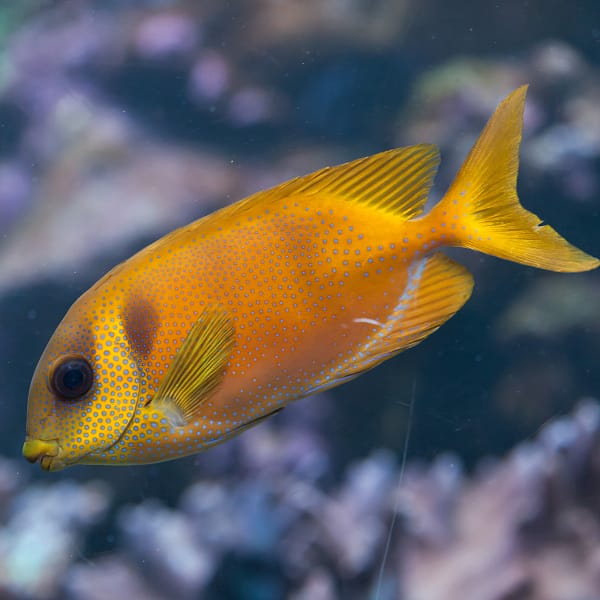 The Blue Spotted Rabbitfish, also called the Blue Spotted Spinefoot, usually is seen in pairs on reefs that are found in Indo-West Pacific. It is shaped like an oblong and is yellow. As the fish grows, a stunning collection of blue spots appear over the entire body.

It requires a 120-gallon or larger aquarium. It is a peaceful species, except when it is kept in a group with other rabbitfish. This Blue Spotted Rabbitfish may be kept with fish that are more aggressive and is often placed in pairs. Its predators are likely to avoid it because of its spines that are venomous, which can be raised when it is disturbed. Be cautious when handling the fish to be safe from being infected by its venomous spines. Rabbitfish are usually reef-safe provided they are fed well. If they are not, it’s possible for them to nibble at and consume certain species of soft and LPS corals.

Its diet is comprised of a range of fresh and cultivated algae and fresh vegetables. It can nip and consume some hard and soft coral polyps.

The Blue Spotted Rabbitfish usually travels in pairs around coral reefs in the Indo-West Pacific. It is oblong in shape and is yellow. As the fish matures, a stunning pattern of blue spots will appear and completely cover the body. It requires a large aquarium. It is a tranquil species unless it is housed together with other rabbitfish. This Blue Spotted Rabbitfish may be kept with fish that are more aggressive and may be maintained in pairs. Its predators are likely to ignore it due to its spines in the dorsal region that can be raised when it is disturbed. Be cautious when handling this fish in order to keep from getting injured by its venomous spines. Rabbitfish are generally reef safe provided they are fed regularly.