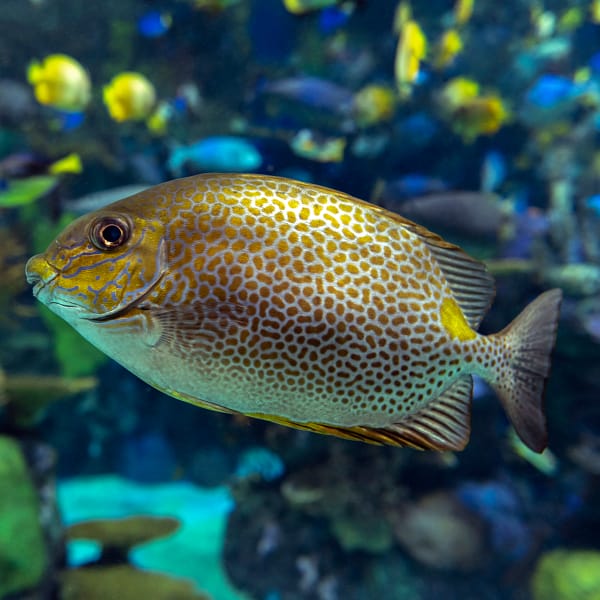 The Yellow Blotch Rabbitfish, also called the Orange-Spotted Spinefoot, Orange Spotted Foxface Rabbitfish also known as Gold Saddle Rabbitfish originates from the reefs of the Western Pacific. It’s a species that is gaining popularity among reef-keepers due to its beauty and algae-eating activity.

The body of Yellow Blotch Rabbitfish is brown and is covered with gorgeous orange spots. It is a camouflage design that has a distinctive posterior false eye that is yellow to make predators confused. Due to its dorsal spines that contain venom (which it may be raised when disturbed) caution must be taken when handling it to prevent the danger of being infected.

It requires a 125-gallon or bigger aquarium that has ample swimming space. It is a peaceful species unless it is housed together with other Rabbitfish. The Yellow Blotch Rabbitfish may be kept with fish that are more aggressive and are often placed in pairs. Rabbitfish are generally reef safe if they are fed well. If not, it’s possible to have them nibble at and eat some species of LPS as well as soft corals. Their diet should include algae sheets as well as other food items designed for fish that eat algae.

The Yellow Blotch Rabbitfish originates from the reefs of the Western Pacific. It’s an animal that’s growing in popularity among reef-keepers due to its beauty and algae-eating activities. Its body is brown and is covered with beautiful orange spots and camouflage patterns with a distinctive posterior false eye to confuse predators. Due to its spines that are venomous (which it may raise in the event of being disturbed) it is important to take care when handling to avoid the risk of getting infected. It needs a large tank with plenty of swimming space. It is a tranquil species unless it is housed in a group with other Rabbitfish. This Yellow Blotch Rabbitfish may be kept with fish that are more aggressive and may be placed in pairs. Rabbitfish are usually reef-safe provided they are fed well. If they are not, it’s possible they will nibble at and eat certain species of LPS as well as soft corals.