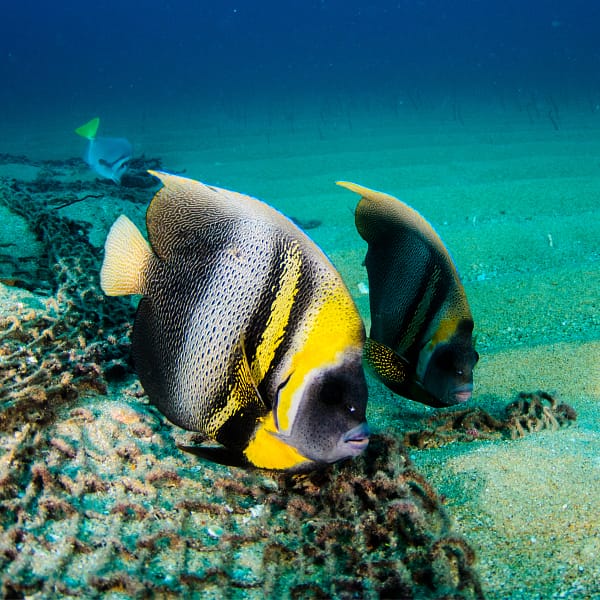 The color of Cortez Angelfish varies markedly from young
to adult. The adult stage is black with blue and yellow semi-circle stripes radiating out through the body. When it matures the Cortez Angelfish appears blue with a light speckled mid-section, and the vertical streak of yellow below the eyes. The dorsal fin, long and long is green and blue, and its head appears blue and has an additional vertical streak of yellow in the area behind the eyes.

It is essential to feed it with a diet comprising Spirulina and marine algae, shrimp, and other meaty foods as well as high-quality angelfish dishes with sponges.

General info about Cortez Angelfish
The color of the cortez angelfish pomacanthus zonipectus varies markedly from young to adult. The stage of juvenile is black, with semi-circular blue and yellow striping radiating out from the tail. When it matures the Cortez Angelfish appears blue with a light middle-section speckled with an arc of vertical yellow right below the eyes. The dorsal fin is green and blue, and its head appears blue and has an additional vertical swipe of yellow right in front of the eye. It is believed that the Cortez Angelfish requires a large tank and is the only angelfish that is in the tank, even when they are young ones. It is not a suitable candidate for a tank with a reef, it is a good choice for a reef tank. Cortez Angelfish eat sponges, and also eat soft and stony corals (sessile invertebrates) and mantles of clams.

Cortez Angelfish Diet & Nutrition
The majority of this marine angelfish diet is sponges, but it is also supplemented with algae, tunicates and eggs. If it is kept in tanks it is recommended to provide it with a diet consisting of Spirulina and marine algae, shrimp, and other meaty foods and high quality angelfish products that contain sponges.

Cortez Angelfish Origin
Cortez angelfish Cortez angelfish is widespread across Eastern Pacific region. It is found from to the north of Gulf of California (from Puerto Penasco, Mexico) in the north, and then to Peru in the south.