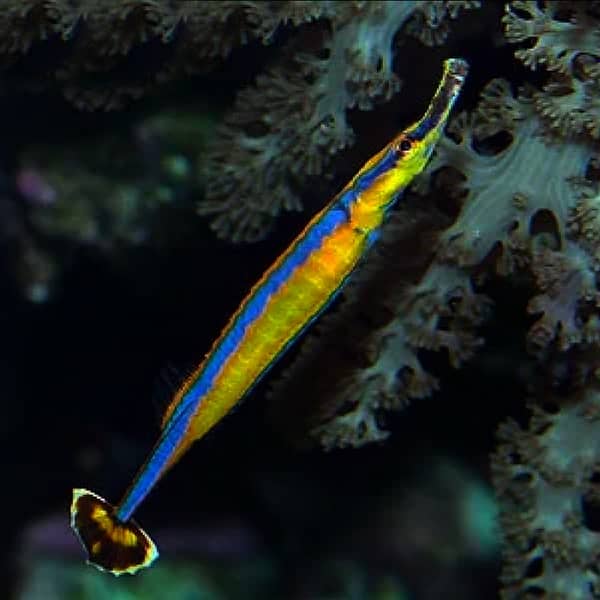 Bluestripe Pipefish is the smallest of the reef pipefishes that are available for aquariums. It is a long, slim body, with a small, tubular mouth, and a round flag-like tail. The body is colored orange and has stripes of blue on either side, running from the snout down to the tail. The tail is red to maroon with extremely diverse yellow, orange with white and yellow markings.

Bluestripe pipefish are among the toughest pipefish However, they are still recommended that only aquarists with expertise keep Pipefish because of their tiny dimensions and unique needs. They usually prefer eating exclusively Cyclops as well as smaller Mysis as well as Nutramar Ova.

Are you looking for the most nutritious food source to feed your Pipefish? We suggest the AlgaGen Tisbe biminiensis.

The species is best kept in pairs of mated or harems comprising two males and several females, in an aquarium of 30 gallons or more. Males tend to be territorial and do not be tolerate the presence of others. If you want to add several bluestripe fish to your aquarium, it’s suggested to add them all at the same time.

Following a lavish courtship dance, the female will then attach her eggs with adhesives to the concave region at the base of the male’s trunk. The pair can be seen regularly mating in an aquarium when they are fed well. It’s difficult to identify gender, however mature males generally appear flat because of the brood patch and females tend to be more round. By using magnifying glasses, opaque pigments can be observed on the male snouts.

It can be kept with shy, small fish like small seahorses, gobies, dragonets, or firefish. The aggressive, territorial, or fast-moving fish don’t make ideal friends. Pipefish can be injured by corals that have tentacles that sting or corals large enough to eat like brain corals. Pipefish can also be injured by invertebrates, such as crabs as well as large shrimp. They spend their daytime swimming vertically against pipes or upside-down beneath the ledge of rock. Between dawn and dusk, they can be seen free in the open, in search of food.

Please note that we promise that ALL aquarium species we sell will be alive and in good health. However, due to the greater amount of maintenance required for this particular species, it is designated “Expert only.” This species is only recommended to the aquarist who is an expert or zoo or research institution. Expert only aqua life is exempt from our warranty after arrival.

The Bluestripe Pipefish is the smallest of the reef pipefishes that are available within the hobby of aquariums. It is a long, slim body, with a small, tubular mouth, and a tail that resembles a flag. This body’s coloration is orange and has blue stripes on each side that runs from the snout to the tail. The tail is red to maroon with extremely variable yellow, orange as well as white marks. This species should be kept in pairs of mates or harems consisting of two males and several females, in an aquarium of 30 gallons or greater. Males are territorial and won’t accept the presence of others. If you want to add several bluestripe pipefish in the tank, it is advised to add them simultaneously. After a lengthy courtship dance, females will attach their eggs onto the concave space that is located on the bottom of the male’s body. Couples will often mate in an aquarium if it is fed well. It’s difficult to tell the gender, however mature males usually have a flattened look due to the brood patches and females tend to be more round. Utilizing magnifying glasses, opaque papillae may be observed at the top of the noses of mature males. It can be kept with smaller, timid fish like tiny seahorses, gobies, dragonets, and firefish. Aggressive, territorial, or swift-moving fish do not make great partners. Pipefish can be injured by corals and anemones with tentacles that sting, or corals large enough to eat them like brain corals. They are also harmed by invertebrates, such as crabs as well as large shrimp. The pipefish spend the majority of their daylight hours swimming vertically against pipes or upside-down beneath a ledge of rock. Between dawn and dusk, they may be seen in the open looking for food.