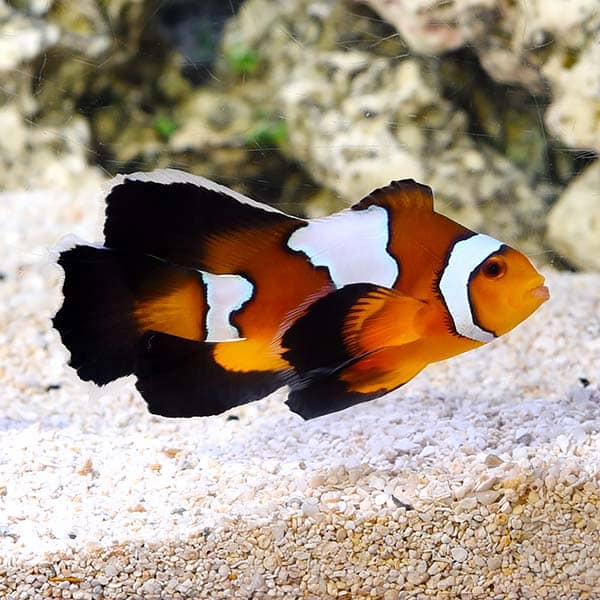 The Captive-Bred Black Longfin Clownfish is a stunning designer clownfish that has been the result of many generations of selective breeding. Like its name implies this particular is a designer Black white and black Ocellaris Clownfish exhibits both longfin and misbar traits. This results in a distinctive Ocellaris Clownfish, elegant in appearance. Like other clownfish that are juveniles, the Captive-Bred Misbar Black Longfin Clownfish has a slightly orange-brown hue that is reminiscent of freshly brewed coffee or sun tea. Its deep jet-black coloring occurs as the fish grows. The area that surrounds the mouth and face is the first to go black, usually at 2 inches in length.

The Captive-Bred Misbar Black Longfin Clownfish is best kept in an aquarium that is at least 20 gallons or greater, and with lots of rock. It could develop a symbiotic relationship the following species of anemones: Carpet (Stichodactyla S. sp. ), Sebae (Heteractis crispa), Bulb (Entacmaea quadricolor), or Ritteri (Heteractis magnifica) Anemones. Although the Captive-Bred Misbar Black Longfin Clownfish is not dependent on an anemone for its survival however if you do decide to keep an anemone within your aquarium ensure that your lighting system and aquarium is able to accommodate the needs of the host anemone prior to adding one to your aquarium.

Captive-Bred Clownfish such as the Captive Bred Misbar Black Longfin Clanfish have distinct advantages over the wild caught species. One reason is that Captive-Bred Clownfish are extremely tough and familiar with the conditions of aquariums at home. Therefore, this Captive-Bred Misbar Black Longfin Clownfish is an excellent option for both novices and experienced aquarists too. This clownfish can be kept in conjunction with many other clownfish that are captive-bred, when introduced to the saltwater aquarium in the same way.

The Captive-Bred Misbar Longfin Clownfish as well as other species of captive-bred clownfish can be raised in the home aquarium with ease and is among the most commonly used “starter” fish that are suitable for breeders of saltwater fish. Females are the bigger of the two both fish, and generally stay close to each and within the tank.

The Captive-Bred Misbar Clownfish is an egg laying species and usually deposits its eggs on a level surface near the bottom of anemones that host them. It will also protect the eggs from other tankmates. The eggs usually hatch within 6 to 11 days, depending upon the temperatures. The fry needs to be raised in a separate tank with a diet consisting of Rotifers, and then baby brine shrimp.

These captive bred fish require meaty and non-meaty foods along with some greens to supplement their diet. High-quality marine flake foods with a high content of spirulina alga and frozen and freeze-dried foods are widely accepted.

Longfin Clownfish aren’t new to the game However, The longfin clownfish feature long flowing fins that have more of a smooth, even outline. This distinguishes them from other longfin species with stiff, jagged fins that have uneven edges.