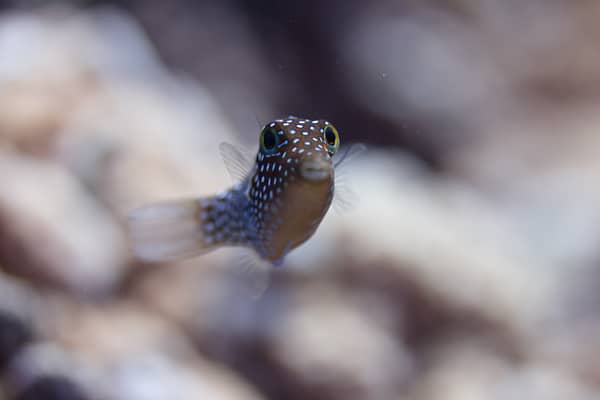 Spotted Puffer is also called the White Spotted Sharpnose Puffer or the white Spot Hawaiian Puffer. The members of the Canthigaster genus are referred to as sharp-nosed Puffers as well as Tobies. It’s a dark reddish-brown that has white spots. It does not have pelvic fins but it has learned how to use pectoral fins for moving around the aquarium.

A 50-gallon or larger aquarium that is exclusively fish-only is ideal. It is possible for it to eat invertebrate tank mates. The teeth of the fish are actually a beak-like structure, which can be used to crush prey.

Some parts of its flesh are harmful. It has the capability to, when it is scared or frightened increase its body nearly twice the size it is normally. It is frightened when it is in a net, so, you should use containers to transport it.

This fish species needs a varied diet that includes meaty food items such as the following: squid, krill the clams, and hard-shelled shrimp in order to reduce their ever-growing teeth.

Spotted Puffer are members of the Canthigaster Genus. It’s a dark reddish-brown with spots of white. It isn’t equipped with pelvic fins, however, it can be trained to make use of pectoral fins for moving around the aquarium. A large or medium, aquarium that is exclusively fish-based is appropriate. It can eat invertebrates inside a reef aquarium. The teeth are actually a fusion beak-like structure that can be used to crush prey. Some of its flesh is toxic. It is able in the event of being threatened or scared to expand the body up to nearly double the size it is normally. It can be scared when it is in a net, so you must utilize a container for transferring it.