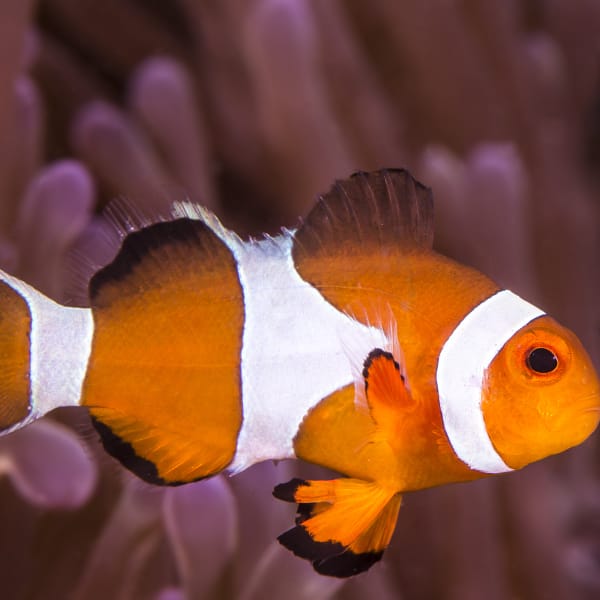 This distinctive color morph of the famous Amphiprion Ocellaris clownfish is distinguished by its unique “snowflake” design on its back. The Captive-Bred Snowflake Ocellaris Clownfish, sometimes referred to by the name of Snowflake Anemonefish, has an orange base, and 3 stripes of white trimmed in black. The middle stripe of white is shaped in a different way and encompasses the majority of the fish’s body. Each middle stripe features unique patterning this is the reason it’s called the “Snowflake.” This part of the Pomacentridae family is a great option for almost every saltwater aquarium.

The captive-bred fish have a unique benefit over species that are harvested wild since they’re typically robust and are more comfortable with conditions that are typical of an aquarium. Thus, captive-bred fishes are the perfect choice for newbies and experienced aquarists alike.

The Captive-Bred Snowflake Ocellaris Clownfish is very easy to breed in your aquarium at home. Females are the biggest of the pair, as the pair generally stay close to each other in the aquarium. Clownfish lay eggs and deposit them on flat surfaces and guard the eggs against other tankmates. The eggs usually hatch between 8 and 11 days, depending on the temperature of the water. The fry should be raised in a separate tank with a diet consisting of Rotifers, followed by brine baby shrimp.

This Clownfish is an aggressive eater. It can eat meaty food and frozen herbivore fish foods.

There are a lot of irregular white marks on its body. Edges of white coloring tend to be sharp and almost angular. Like their name suggests they are not alike.