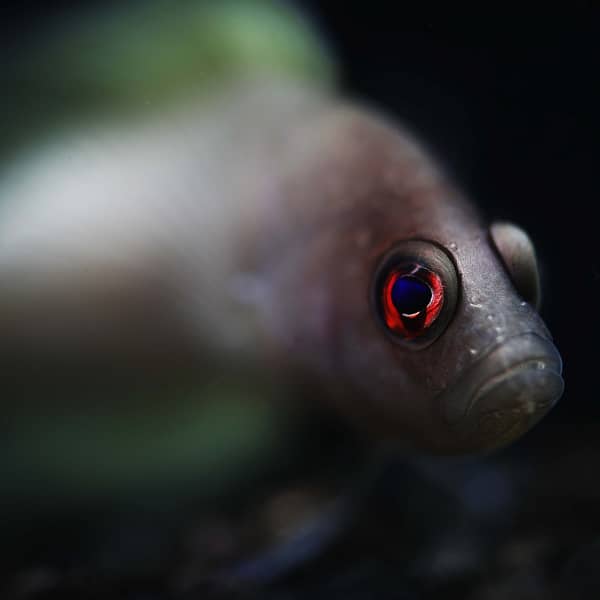 Also called also known as the Big-Eye Dottyback or Hidden Basslet (it’s notoriously private) The Ring Eyed Dottyback inhabits crevices in reef faces and lagoons in depths of between 20 and 30 feet. The aquarium is where they typically hide within the rockwork, but occasionally break out of the cover to grab bits of food when they are fully settled.

Although it isn’t as aggressive as other tankmates, the Ring-Eyed Dottyback could be aggressive towards smaller, passive species like nano gobies in small aquariums. It’s recommended to keep just one per tank unless the aquarium is big. To encourage the best color and prevent common fading in your aquarium, provide it a diverse diet, supplemented with colors-enhancing foods like vitamin-enriched brine, mysis Shrimp, and the finest prepared carnivore meals.

The Ring Eyed Dottyback (Pseudoplesiops typus) is a distinct sexual dichromatism. Male specimens are mostly pinkish red while females are more pale pink, with shades of yellow-green at the point where the caudal, dorsal, and anal fins join the body. It’s notoriously quiet the Ring Eyed Dottyback inhabits crevices in reef faces and lagoons between 20 and 30 feet. In aquariums they usually remain in the rockwork however, they will sometimes dart out from the cover to grab a piece of food once fully acclimated. Although not as aggressive as other tank mates, the Ring-Eyed Dottyback can be aggressive towards smaller species that are passive, such as nano gobies found in smaller aquariums. It is best to limit it to one per tank unless the aquarium is large.