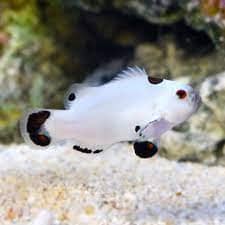 This Platinum Storm Clownfish does best when it is kept in an aquarium that is at minimum 20 gallons or more that has plenty of live rock. It could be a part of a symbiotic partnership with the following species of anemones: Carpet (Stichodactyla S. sp. ), Sebae (Heteractis crispa), Bulb (Entacmaea quadricolor), or Ritteri (Heteractis magnifica) Anemones. Platinum Storm Clownfish does not require an anemone for its survival however if you do decide to house an anemone ensure that the lighting system and aquarium can accommodate the requirements of your host prior to including it in your aquarium.

Captive-Bred Clownfish possess benefits over species that are harvested from wild. One of them is that they are exceptionally tough and at ease with conditions in aquariums at home. This is why this Platinum Storm Clownfish makes an ideal choice for both novices as well as experienced aquarists. Platinum Storm Clownfish can be kept alongside a variety of other clownfish that are captive-bred, when introduced to the aquarium simultaneously.

This Platinum Storm Clownfish, like many other clownfish that are captive-bred, can be bred in a home aquarium in a relatively simple manner and is among the most popular “starter” fish that are suitable for saltwater breeders. The female is more dominant in the pair while the fish generally stay close to each other inside the tank.

The Platinum Storm Clownfish is an egg layer. It will usually deposit eggs in flat areas close to the bottom of an anemone host. They also defend the eggs from tankmates. The eggs usually hatch within 6 to 11 days, depending on the temp. The fry should be kept in a separate tank eating rotifers, and then baby brine shrimp.

It is an Omnivore that requires both fleshy and fatty foods, and some greens as part of its diet. High-quality marine flake foods with a high content of spirulina alga and frozen and freeze-dried food items are widely accepted.

It is the Platinum Storm clownfish ( Amphiprion Ocellaris) is an uncommon and highly sought-after designer clownfish breed. Its clean, crisp white body creates an impressive standout in the most vibrant aquariums.