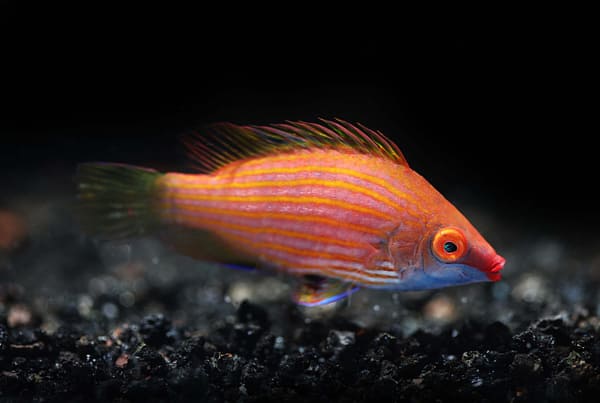 It is considered to be one of the top reef wrasses available to aquarists The Pink-Streaked Wrasse is a tiny, vibrant fish that makes a great feature in any aquarium with a reef (even Nano-Reef). They also have a sexually dichromatic, with males sporting more prominent yellow lines along the body and blueish-gray markings on their gill cover.

Although it’s very timid initially, it eventually becomes rather bold and will spend an extensive amount of time out in the outdoors. It is a very good feeder, eating frozen meals and flake food. It is largely ignored by of its tankmates. However, the closely-related Pseudocheilinus wrasses could be chasing it, but the Pink-Streaked Wrasse is more inactive. In the event that the tank’s big enough, and there are numerous hiding spots The P. ataenia can jump among the branches hard or soft corals.

Based on the guest experts Scott Michael: “I have never witnessed it be aggressive towards any other fish like the two Possum Wrasses that are smaller (Wetmorella Spp.) I added it to an aquarium where the P. ataenia had become established. They Possum Wrasses are very similar in form to the Pink-Streaked. One might expect them to provoke aggression. There were a few instances one of the Pink-Streaked wrasses I had kept would look at an even larger fairy wrasse, as if it were going to wash it. But I have yet to observe any real cleaning.”

It is considered to be one of the most desirable reef wrasses to aquarists Pink-Streaked Wrasse small and colorful fish that makes a great inclusion to every reef tank (even that of the nano-reef). They also are sexually dichromatic, with males sporting more prominent yellow lines along the body and bluish-gray markings along the cover of the gills. While it’s shy initially, it will eventually become very bold and spends an extensive amount of time out in the open. It is a great eater, taking frozen food and flake food. It is not noticed by the majority of its tankmates, however, the closely-related Pseudocheilinus wrasses might be chasing it, but the Pink-Streaked Wrasse is more inactive. In the event that the tank’s big enough and has numerous hiding places it is likely that the P. ataenia can swim among the branches on the hard or soft corals.