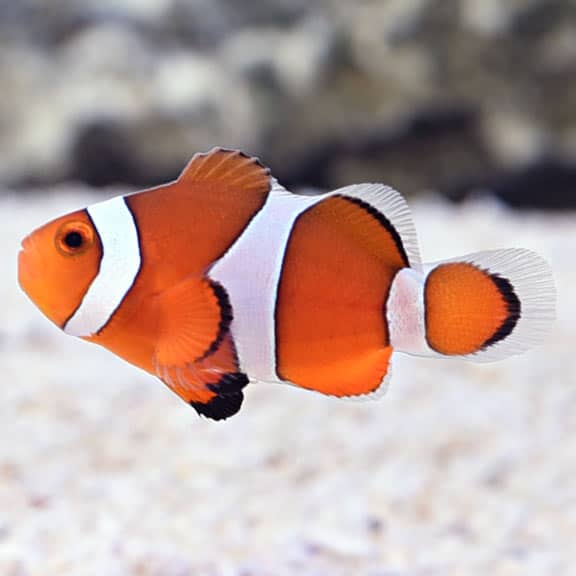 It is believed that the ORA® Stubby Ocellaris Clownfish also offers distinctive advantages over species that are wild-harvested. The Stubby Ocellaris Clownfish that is captive-bred is extremely durable and familiar with the conditions of aquariums at home. It is the perfect choice for newbies as well as experienced aquarists. The Captive-Bred Stubby Olecaris Clownfish is also able to be kept in a group with other clownfish that are captive-bred, in the event that they are brought into the aquarium in the same way.

The Captive-Bred Ocellaris Clownfish is easily bred in your aquarium system. Females are the biggest of the pair, The two species generally stay close to each other in the tank. The Captive-Bred Stubby Olecarians Clownfish is an egg laying fish and will lay eggs in a level area and protect them from tankmates. The eggs are usually born within 6 to 11 days, based on the temperature of the water. The fry need to be raised in a separate tank with a diet consisting of rotifers and then baby brine shrimp.

This Clownfish is an aggressive eater. It is tolerant of meaty food items and frozen herbivore dishes.

The Stubby Clownfish is distinguished by black outlining and white bands that run across an orange body similar to that of the first False Percula, however, it is smaller in size which is why it’s called Stubby.

The Stubby Clownfish is a very loved fish. It can be seen together with other Clownfish inside the tank dependent on how big the tank is. They are extremely successful in aquariums and are very tranquil.

They do not require an Anemone to live and will accept many different Anemones as hosts such as corals. Their preferred Anemones to stay with are carpet Anemones Stichodactyla Gigantea as well as the magnificent Anemone Heteractis Magnifica.

These fish are tolerant of all fish-based foods and are ideal for aquariums with reefs. It is possible to keep multiple fish in one tank and they are best kept in groups.

Clownfish possess a distinct swimming pattern that differs from the majority of fish. This could be passed on by their genetic makeup resulting from years of wiggling in their Anemones tentacles. When the Clownfish moves within its tentacles that sting, the Anemone’s mucus will likely be splattered across the body of the Clownfish and helps to shield it from further stabbing.

In the wild, they reside in small groups, with one dominant female that is large with a smaller but active male as well as a couple of juveniles and males who are smaller. If the female is gone, the male who is the largest will switch sexes and become the dominant female, with the remaining Clowns climbing the ladder to follow behind it.