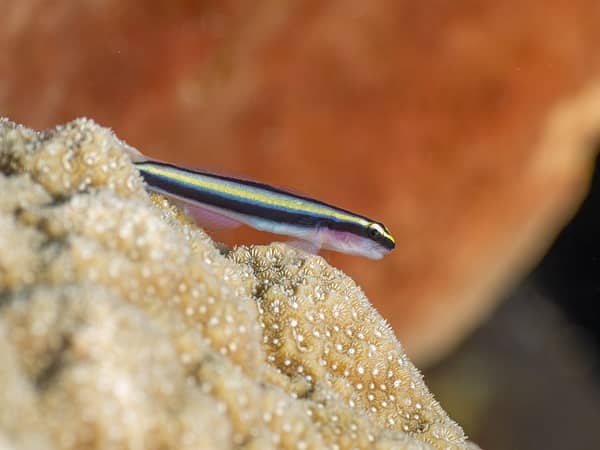 This ORA® Captive-Bred Sharknose Goby Elacatinus evelynae is a vividly-colored cleaner species that will add a stunning element to your aquarium or nano-aquarium setup. Although it is not as striking in appearance as that of the Neon Goby (Elacatinus oceanops) The ORA Captive-Bred Sharknose Goby features vibrant yellow hues (most noticeable close to the head) which blend seamlessly into the blue electric stripe, creating a striking two-tone appearance. As with all fish, their coloration is influenced by light, diet, and environmental conditions.

This ORA Captive-Bred Sharknose Goby must be kept in a reputable 10 gallon or larger tank. It rarely becomes aggressive with other fish. However, it can be territorial and can show aggression toward its own species unless they’re mated.

These fish function as natural cleaners and establish a clean-up station on reefs in which fish can be cleansed of parasites. They spend their time perched on the rocks or glass aquariums. They are extremely serene and can be a wonderful addition to any tranquil tank. Gobies are part of the biggest families of marine fish. These tiny fish are found around reefs or on flats of sand. The majority of Gobies are famous for their burrowing habits. The fish dig burrows into the sand to protect themselves. Certain Goby species have been known for sharing their burrows Pistol Shrimp; this behavior could be replicated in the home aquarium. The majority of Gobies have ventral fins with cupped fins which almost join below their gill plates, which are used as perching mechanisms.