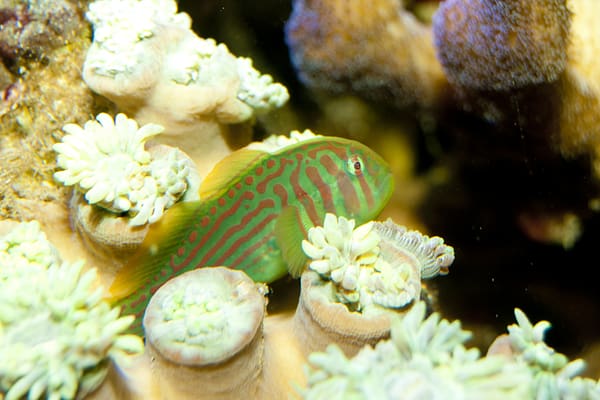 The Green Clown Goby, also called the Earspot Coral Goby, is prevalent in reefs in the Indo Pacific, found usually within hard and soft coral colonies. They are tiny-shaped fish that have an extremely large head in comparison to their dimensions. There are a variety of colors of this species, and it is a greenish to yellow color that has stripes of orange vertically around its head. They are peaceful fish that can be fantastic for a reef aquarium with populations of polyp corals because they love being in water and swimming among the polyps. But, they can also nip on the polyps in SPS corals.

It needs a 10 gallon or bigger aquarium with branches of coral. It is not likely to become aggressive with other fish, but it can battle with its own species in smaller aquariums. It is, therefore, best to keep it in a tank together with other gentle species.

It is normal for clown gobies to reproduce in aquariums. Be cautious when the aquarium is home to Acropora Sp. as well as related SPS corals. The eggs will be laid on the side of the branch that is beneath it and cause tissue loss in the part in the coral. But, under ideal conditions, the coral can replenish the tissue it lost.

It is believed that the Green clown’s diet needs to comprise a range of brine shrimp and frozen mysis shrimp. table shrimp, as well as frozen food preparations for carnivores.

The Green Clown Goby is common in the coral reefs of the Indo-Pacific that are typically located in hard and soft coral colonies. They are tiny size fish with an extremely large head given their weight. There are numerous shades that this species can be found in. It is a greenish to yellow color, with horizontal stripes of orange on the head. They are a calm fish that can be fantastic for reef aquariums that have populations of polyp corals since they like swimming around and hiding in the polyps. But, they can attack the polyps of SPS corals. It is not likely to be aggressive with other fish, but will fight with its own species when it is in a small tanks. So, it is recommended to keep it in a tank with other species that are docile. It is not uncommon for clown gobies spawn in aquariums. It is important to be cautious when the aquarium is home to Acropora Sp. as well as related SPS corals. They lay their eggs on the side of the branch that is beneath it and will trigger tissue recession in the coral. In favorable conditions, coral can regenerate the damaged tissue.