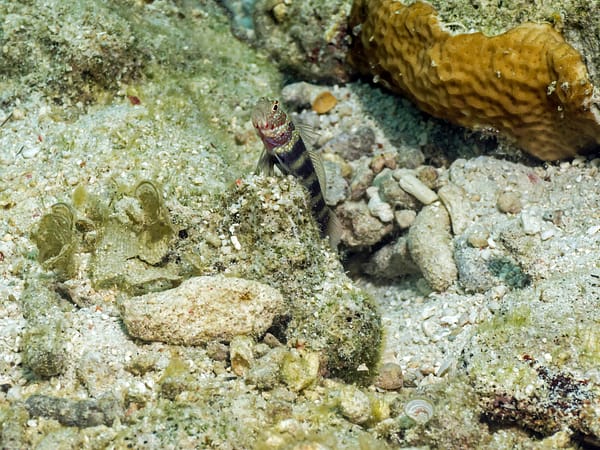 The Wheeler’s Shrimp Goby also called Wheeler’s prawn, Gorgeous and Wheeler’s Goby, was first discovered in Indonesia in 1982 by Hoese and Randall. Its body is white with large orange-red bands as well as little blue spots. The dorsal fin is blue and red dots.

It is best to keep it in a 10 gallon or bigger aquarium with a sand-covered bottom, to create burrows. It likes having peaceable tankmates and lots of hiding places. Smaller groups or pairs are likely to thrive in aquariums, however, they must be introduced to the tank at the same time.

Extremely tough and resistant to disease the Wheeler’s watchman goby has been reported to reproduce with success in aquariums.

The food plan should include an assortment of freshly caught or frozen fish, brine shrimp, or mysis shrimp. The diet should be fed twice a day.

Wheeler’s Shrimp Goby is a small calm fish that has an intriguing symbiotic relationship with the pistol shrimps. This species prefers pairing with Alpheus Ochrostriatus, however, it sometimes will pair with A. bellulus and A. randalli in captivity. Set up a sand-based substrate for the shrimp and goby to dig. Feed them meaty meals like mysis or brine shrimp with enriched brine. The Goby is easy to take care of when kept together with other peaceful tank mates.