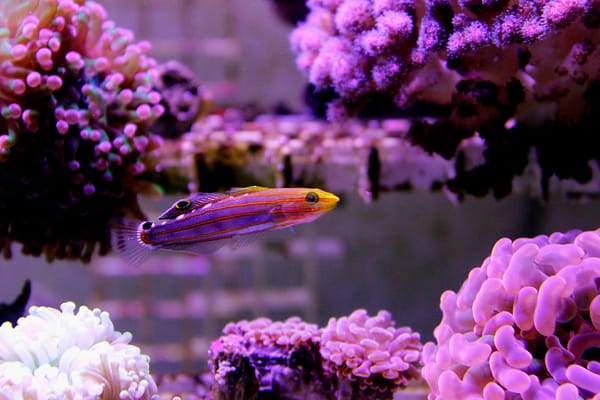 Biota Captive Bled Court Jester Goby are reared and spawned by the Biota Marine Life Nursery in Palau. They are sometimes referred to as Rainford’s Goby, or Old Glory was first found within the Western Pacific in 1940 by Whitely and is named due to its brightly colored body. The body is blue and green and has horizontal stripes of orange that run throughout the body. It is very serene and tranquil and is an excellent addition to the reef or fish-only aquarium.

It is best to keep it in a 10 gallon or greater aquarium that is well-established and includes live rocks and sand that the fish can roam. It is best to have just one species in the aquarium, in the event that the tank is big with plenty of hiding spots. It’s rarely aggressive toward other species.

The Court Jester Goby Captive-Bred is unique in comparison to wild-harvested species. They are stronger and more at ease with conditions in the aquariums of homes. This makes captive bred fish the perfect choice for newbies and experienced aquarists.

The possibility exists for Court Jester Goby to spawn successfully in aquariums.

The food plan should include tiny crustaceans, filamentous algae including frozen and live mysis shrimp, and brine shrimp.

The body is blue and green along with orange-colored horizontal lines that run throughout. It is very serene and tranquil and makes an excellent addition to a reef aquarium or fish-only. It is best placed in an aquarium that is established and includes live stones and sand where the fish can play. It is best to have just one species in the aquarium unless the tank is huge with plenty of hiding spots. It’s not aggressive toward other species. It is possible for Court Jester Goby to spawn successfully in aquariums.