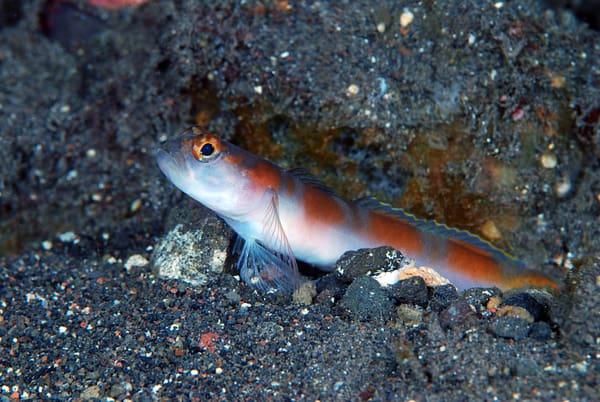 This species of shrimp goby forms a symbiotic relationship with alpheid shrimp. They coexist with the burrowing crustacean. They keep surveillance while the shrimp digs a hole for the two to share.

The best configuration is an established 30 gallon or greater aquarium that has plenty of live rock as well as a layer of fine or moderately-sized sand substrate to sort through. A small aquarium with a greater horizontal area to provide living space is preferred over a larger one. Additionally, a well-fitting canopy is essential to stop this Flagtail Shrimp Goby from jumping out of the tank. It is not likely to become aggressive toward other fish, but it is territorial and fights with its own species unless the event of a mating pair.

Flagtail Shrimp Goby adapts well to reef aquariums but poses the risk of threatening small fragile ornamental shrimp. Its diet should comprise an assortment of frozen or fresh mysis shrimp as well as vitamin-rich brine shrimp and table shrimp that are finely chopped. It is recommended to feed it every day at least twice.

The Flagtail Shrimpgoby (Amblyeleotris yanoi) has fuzzy pink bands and a white body. The tail is striped with pink and the fins also have a bit of yellow. These gobies look very like the famous Aurora Shrimpgoby (A. aurora) however the Aurora is red with a stripe beneath the eyes as well as Red in its tail as well, both of which aren’t present from the Flagtail.

This fish is most famously known for its part in the family of gobies referred to as shrimpgobies. They develop symbiotic relations with specific pistol shrimp. They build and maintain their own burrows for the two to reside in, while the goby guards the lair as well as provides food. Shrimpgobies can also be tiny sandsifters that do not have the same sifting power as those commonly referred to by the name of “Sleeper Gobies”.

Gobies love tanks that have lots of rock hiding spots. They can be found with most tankmates, but they can become hostile towards other gobies. Gobies are known for their jumping skills; when they feel threatened or scared they are seen jumping out of reef aquariums that are not covered. Keep the tank completely well-protected and offer plenty of places to hide.

They will eat many frozen foods as well as pellets and flakes.