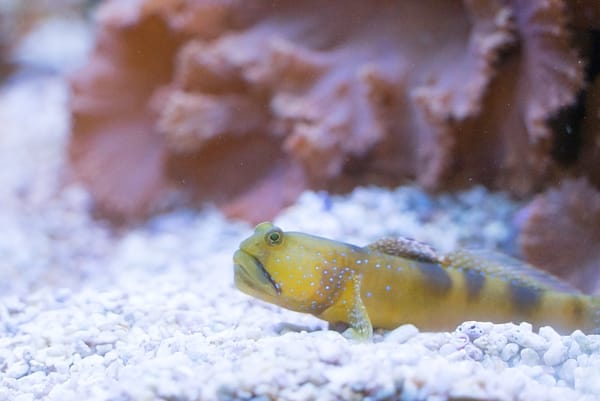 The Bluespotted Watchman Goby, commonly known as the Blackfinned Shrimp Goby, was first identified by Bleeker in 1849. There are two distinct color phases. The first one has an orange head that has blue spots, while the body is red with orange bands, while the dorsal fin is black with spots. The second stage is olive drab, with blue spots.

It is best to place it in a 30 gallon or bigger aquarium that has plenty of coral rubble. It needs plenty of space for swimming as well as a sand bottom to allow for digging. It rarely becomes hostile to other fish, however, it is territorial and may engage in battle with its own species except if they are a mated pair. It can be aggressive to smaller, ornamental shrimp. Aquariums require a secure cover to stop them from escaping.

It feeds mostly on prey that is suspended in the water column. However, it can also grab food from the surface. The diet should include mysis shrimp as well as brine shrimp along with table shrimp. It should eat at least three times a day.

There are two colors. The first one has an orange head, with blue spots. The body is red with orange bands, while the dorsal fin features black spots. The second stage is olive drab and blue spots. It is best to place it in an aquarium with lots of loose coral rubble. It requires plenty of space for swimming and a bottom that is sand to burrow. It is not often that it becomes aggressive with other fish, however it is territorial and will fight with its own species except if they are a mated pair. The Blue Spotted Watchman Goby can be aggressive to smaller ornamental shrimp. The aquarium requires a tight fitting canopy to stop it from getting out.