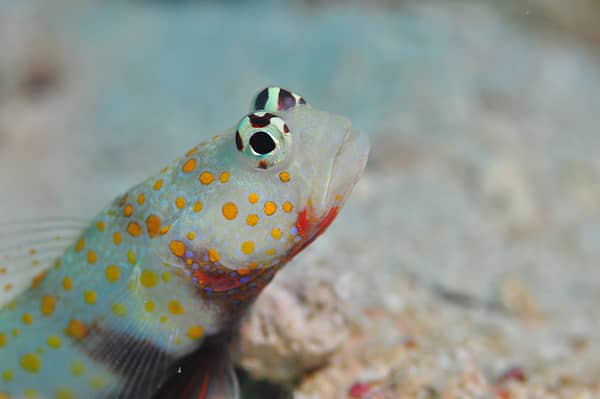 The Orange Spotted Goby, also called Goby, Spotted Prawn Goby, or Orange Spotted Shrimp Goby was first observed within the Western Pacific in 1938. The body of the fish is white with orange spots highlighted in brown. It has the ability to form symbiotic alliances with nearly blind Alpheid shrimp. It keeps an eye on the shrimp as the shrimp digs a burrow, which they share.

It is recommended for aquariums 10 gallons or larger and contains adequate hiding areas as well as ample space for swimming. The aquarium must have the lid tightly fitted to prevent it from escaping. This Orange Spotted Goby adapts well to reef aquariums. However, it could pose a danger to tiny, delicate decorative shrimp. It is attracted to an area of fine sand and loose coral rubble to sift through.

The Orange Spotted Goby can spawn successfully in aquariums.

The diet of the fish should include an assortment of mysis shrimp that are frozen or fresh and vitamin-rich brine shrimp or table shrimp. It is recommended to feed it daily at least two times.

Its body is white, with spots of orange highlighted in brown. It can create symbiotic relationships with almost any blind Alpheid shrimp. It is able to keep an eye while the shrimp digs up a burrow for them to share. It’s ideal for aquariums with lots of hiding spots and plenty of swimming space. The aquarium must have the lid tightly fitted to stop it from escaping. This Orange Spotted Goby does pose the risk of threatening small fragile ornamental shrimp. It favors fine sandbed and coral rubble that is loose to sort through.