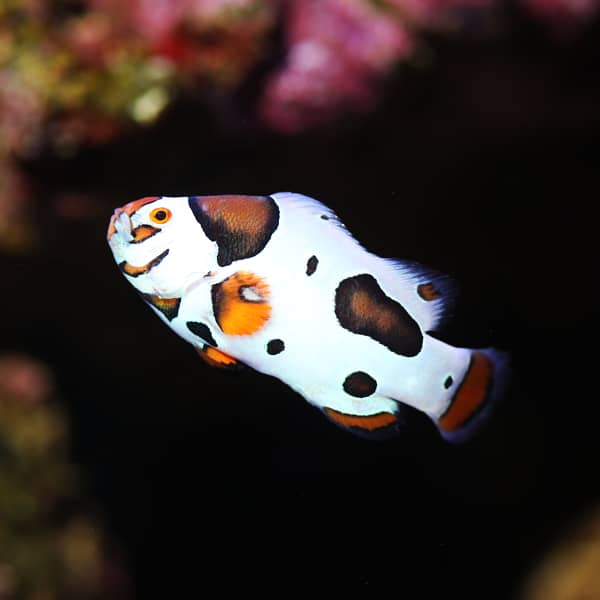 Captive-bred fish possess a distinct benefit over species that are harvested wild since they’re typically resilient and more accustomed to the conditions of the aquarium in the home. So, captive-bred fishes are an excellent choice for beginners as well as experienced aquarists.

This ORA® Captive-Bred Premium Picasso Percula Clownfish can be easily bred within your aquarium. Females are the most massive of the two and both fish tend to remain close within the aquarium. Clownfish lay eggs and deposit them on flat surfaces and guard the eggs against other tankmates. The eggs usually hatch between 8 and 11 days, depending on the temperature of the water. The fry need to be raised in separate aquariums eating rotifers, followed by brine baby shrimp.

The Picasso variation is found naturally within the Solomon Islands and Papua New Guinea However, it is extremely rare. ORA’s line of Picassos began in 2004 with one native male of the Solomon Islands, which was coupled with an typical Onyx female. The following years, we’ve added more wild Picassos to our breeding programs. These stunning fish display more white, especially in their central stripe. Each fish is unique and carefully selected by our knowledgeable graders. They grade these fish based by how much white in the tank as well as the peculiarity of the markings as well as the rarity in the marks. It is possible that the Picasso Clownfish may be radically colored on one side, and only have an extra blob that is white opposite.