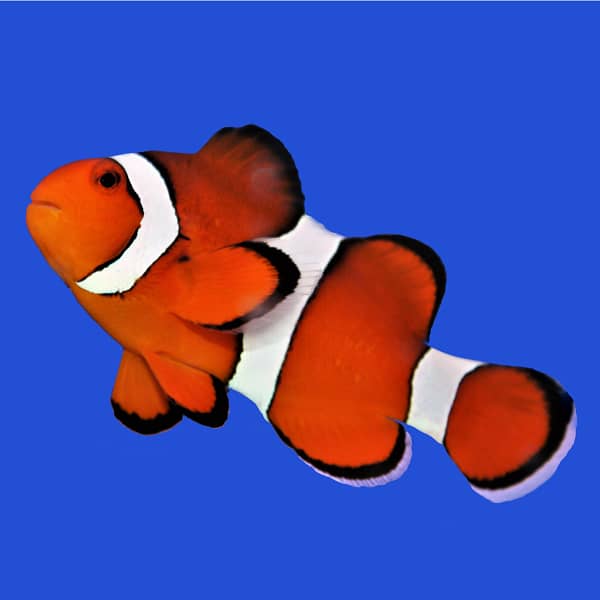 This ORA® Captive-Bred Caramel Clownfish is a color variant of the Black as well as the White Ocellaris Clown. And is usually found in conjunction with anemones along reefs within the Coral Sea. It can be seen in a single or, more frequently in small groups in the same anemone, such as Heteractis magnifica, or Stichodactyla mertensii. The captive-bred clownfish can grow to the size of 3 inches within the aquarium and can be kept as a single fish or in groups.

ORA® Caramel Clownfish is unique due to its caramel-colored body as well as three white stripes along its sides. At the time of their birth, they resemble Ocellaris Clownfish. However, their orange color gets more intense and darker with the passage of time.

It is believed that the ORA® Caramel Clownfish has an advantage over species harvested from wild. Caramel Clownfish are extremely tough and more used to the conditions in home aquariums. This makes them an excellent choice for beginners and experienced aquarists.

Captive-bred clownfish are simple to breed in the aquarium of your own home. The females are the largest of the pair and two fish usually remain close to one another in the tank. They are egg-laying fish and lay eggs on a flat surface and will protect them from their tankmates. The eggs are usually born between 6 and 11 days, based upon the temperatures. The fry need to be raised in a separate tank with a diet consisting of baby brine shrimp and rotifers.

Captive-bred clownfish are omnivores needing both meaty and non-meaty food along with certain greens to supplement their diet. High-quality marine flake food that is high in spirulina algae along with freeze-dried and frozen foods is widely accepted.

Caramel Ocellaris Caramel Ocellaris is a luscious variant in color from the Black Ocellaris. Most Caramels change to black once they have reached maturity, but there are some that do not. Caramels aren’t brown at all, They look more like normal orange A. Ocellaris that have an added layer with fine black mesh