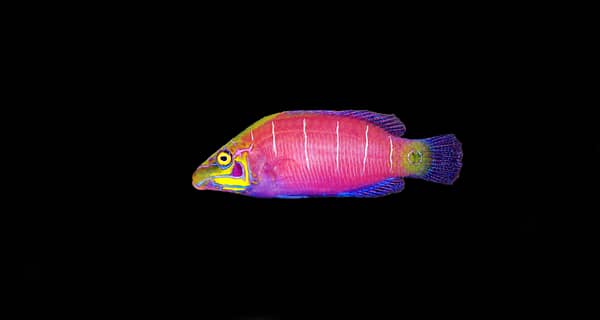 Mystery Wrasse, sometimes referred to as the Whitebarred Wrasse or Fivebarred Wrasse is a combination of blue, yellow, and purple hues that outline a smile on its face. The body is reddish-maroon and has thin white vertical stripes and an eye spot that is surrounded by yellowish hues in its tail. It’s green in color. Younger fish may be greener in the body, but they will transform into red when in the aquarium.

This difficult to locate species is ideal for a 90-gallon or larger tank with plenty of rock that is alive and sandy bottom. It is a great fish to have in the reef aquarium, and also inactive with the most well-known reef fishes, which includes other species of wrasses. It’s always searching for live food that are small crustaceans such as pyramidellid snails or flatworms that are commensal. Once mature and fully grown, the Mystery Wrasse might be attracted to smaller ornamental shrimp which are introduced following the time the wrasse has been established in the aquarium for reef fish.

It is recommended that the Mystery Wrasse diet should include mysis shrimp with vitamin enrichment frozen and vitamin-enriched brine shrimp frozen in brine, and other meaty food items, along with the highest quality seafood flake, and pellets.

With the typical morphology of the banana with fins of many wrasses, this wrasse from the central-western Pacific can reach up to 4-inches in size. Its eyes with a yellow rim move separately and appear to be looking out for the activities in and out of the tank. The base color is variable generally ranging from pinkish/purplish to lavender and the face is yellow with pink/purple lines. The caudal peduncle appears yellow and is decorated with an ocellus that is prominent, or eyespot. Thin white vertical bands can be observed on the flanks, but they tend to fade away as the age of the specimen.

Diet of the Mystery Wrasse

In the natural world, P. ocellatus feeds on tiny benthic invertebrates. Mysids are finely chopped seafood, frozen formulations designed for small carnivores and small sinking pellets are excellent alternatives for specimens that are kept in captivity. Of course, live animals inside the tank will be also sought-after and consumed. This could include small ornamental crustaceans, as well as some invertebrate cleanup team members So keep this in mind when selecting tankmates. Positively the species, which is common with other species in its genus is well-known for its dietary preferences of pyramidellid snails as well as the commensal flatworms that attack corals and clams.