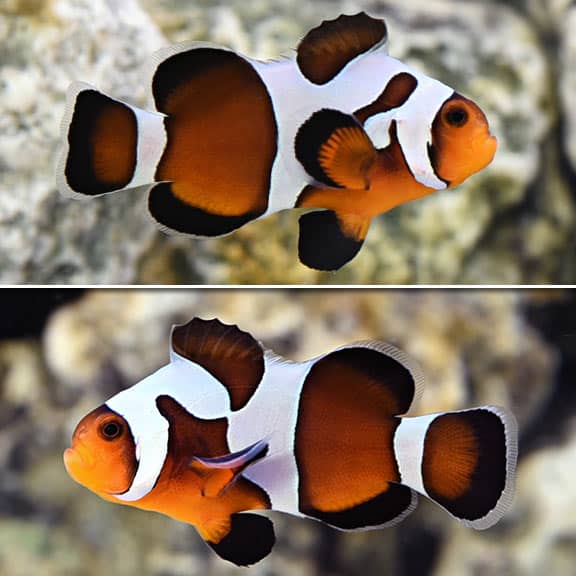 Captive-Bred MochaVinci Clownfish is a vivid color variant of the well-known Ocellaris Clownfish. What separates DaVinci variants from the conventional Ocellaris Clownfish Is the prominent white bands that curve and then join together in the shape of strokes of a brush. The Snowflake Ocellaris Clownfish demonstrates a similar amount of white coloring, but the border or edge between the white and orange coloring is more rough and random in its pattern. MochaVinci Clownfish retains the dark orange coloration in clean broad blocks that are beautifully traced with thick black stripes and are smoky to create a stunning glowing, smoldering look.

This Captive-Bred MochaVinci Clownfish does best kept in an aquarium of at least 20 gallons, or greater and with lots of rock. It is possible to develop a symbiotic relationship with the following species of anemones: Carpet (Stichodactyla in sp. ), Sebae (Heteractis crispa), Bulb (Entacmaea quadricolor), or Ritteri (Heteractis magnifica). While this Captive-Bred MochaVinci Clownfish does not require an anemone in order to flourish if you do decide to house an anemone make sure your lighting system and the aquarium can accommodate the requirements for the host anemone.

This Captive-Bred MochaVinci Clownfish, like many other captive-bred Clownfish can be bred in a home aquarium with ease and is among the most popular “starter” fish that are suitable for saltwater breeders. Females are more dominant of the two and the two fish typically stay close to one another in the aquarium.

The Captive-Bred MochaVinci Clownfish is an egg laying fish. It will usually lay eggs onto a smooth surface, or close to the bottom of an anemone host and will protect the eggs from any tankmates. The eggs are usually born in between 6 and 11 days, based on the temp. The fry need to be raised in a separate tank eating Rotifers, and then the baby brine shrimp.

The Captive-Bred MochaVinci Clownfish is an Omnivore that requires both fleshy and meaty food and certain greens to supplement their diet. High-quality marine flake food that is high in spirulina algae, as well as freeze dried and frozen food items, are easily accepted.