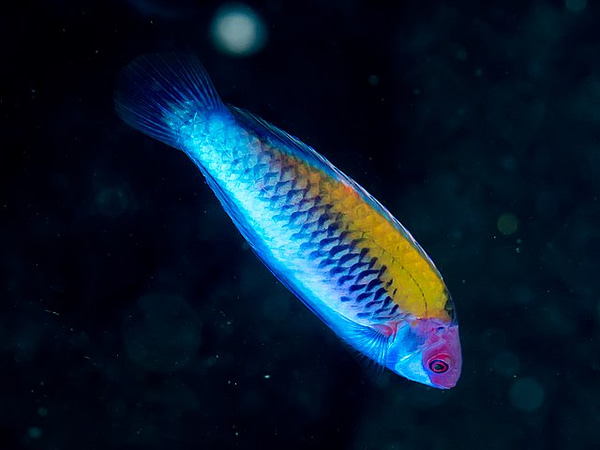 The Johnsons Fairy Wrasse, Cirrhilabrus Johnsoni, is a stunning wrasse, which was difficult for aquarists to acquire due to its limited appearance in the aquarium market. While abundant in its native habitat it is not a common sight in the aquarium industry. Johnsons Fairy Wrasse is only located and has been identified within the Marshall Islands at the Kwajalein Atoll. For aquarists, this particular species of Cirrhilabrus wrasse is now more readily available and remains desired as one of the smallest members of the genus. reaching an adult size of approximately 3″.

Cirrhilabrus johnsoni is a reef dweller, found at moderate depths of 60-90 feet. The striking wrasse is seen swimming in solitary rubble with mixed algae-like Halimeda soft corals, Halimeda rock structures that contain coralline algae. The ideal arrangement to house the Johnsons Fairy Wrasse is a well-established marine aquarium with a minimum of 50 gallons of aquascaped with plenty of live rock as well as lots of space for swimming. Johnsons Fairy Wrasse is regarded as to be reef-safe and is recommended to be kept in tanks with peaceful tankmates. A protected aquarium is necessary because all wrasses are believed to be jumpers.

The Johnsons Fairy Wrasse diet must include vitamin-rich frozen/thawed mysis shrimps and vitamin-enriched brine frozen/thawed shrimp, as well as other meaty meals together with a high-quality fish flake and pellets.

This fish is among the smaller fairy wrasses and is best kept in conjunction with others who are calm tank companions. It can be kept as a single or as a pair (male as well as female) or as the harem of a male with several females. If it is kept in a harem males will engage in an interesting and colorful courtship routine. They can be kept in a harem together with other peaceful species of wrasse, and a protected top is a requirement as they will leap.