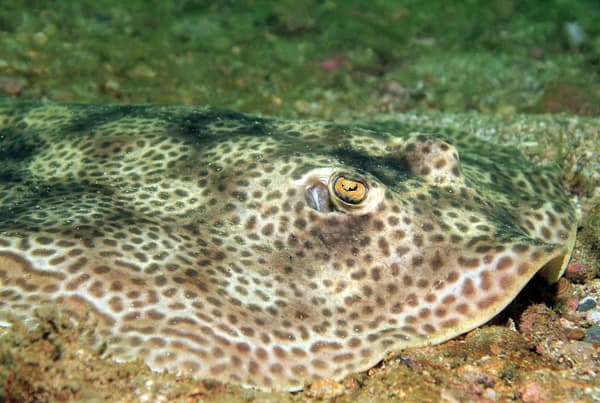 The Haller’s Stingray is sometimes referred to in the form of the California Stingray. It is a bottom-dwelling fish with brown bodies as well as yellow marks. The tail spine contains venom that is used to protect. Be cautious when you are netting it or if it isn’t visible, and maintenance is being performed within the tank.

The Haller’s Stingray prefers cooler temperatures of water and should be only maintained by an experienced enthusiast. It requires a 180-gallon tank that has water temperatures between 75 and 68 degrees. The aquarium must be at least two-foot-wide from the front to the back for an adult. It is fond of covering itself on the substrate with soft material to act as camouflage. A harder substrate could scratch the abdomen and create an infection. It should not be exposed to medications containing copper. It can devour any crustacean or fish within the tank.

The process of feeding can be difficult at the beginning. When the fish is first introduced to the aquarium, tiny pieces of squid that have been cleaned as well as live shrimp from the saltwater feeder must be used to lure this fish to consume. It can then be fed scallops, shrimp, or even pieces of freshly caught marine fish.

The approximate size of your Stingray is measured by the size of the fish.

We are able to promise that ALL aquatic species we provide will be alive and in good health. But, due to the greater amount of attention required for this specific species, it is designated “Expert only.” This species is suggested only for aquarists who are experts or zoo institutions. Expert-only aqua life is exempt from our guarantee for a period of time after their arrival.

Medium to large-sized round stingray that has an annular disc approximately the same length and width. The snout is sharply angulous. The anterior margins of the disc are nearly straight to snout tips, the apices are rounded and broad. The disc is smooth and smooth. Pelvic fins are triangular in shape with rounded margins on the posterior, lengths significantly greater than the width.

Tail short and broad-based with skin folds lateral to the skin that are the most prominent in the anterior part of the caudal sting. Tail length ranges from 49 to 52% of total length. The sting is short in the Caudal region, similar to or slightly less than the caudal fin. Caudal fins are short in height, and has a tall upper lobe, and an unrounded, blunt or slightly marginally indented posterior margin.

Coloration of the Dorsal area is highly variable. yellowish light brown or beige or even solid black however, it is usually quite light and has a the dense cover of tiny dark or light yellowish spots, or variations. Small spots usually in large clusters, that are separated with the help of a dark honeycomb design which can also be packed with spots. Ventrum is pale or beige, usually with darker margin that could exhibit similar patterns to dorsum.