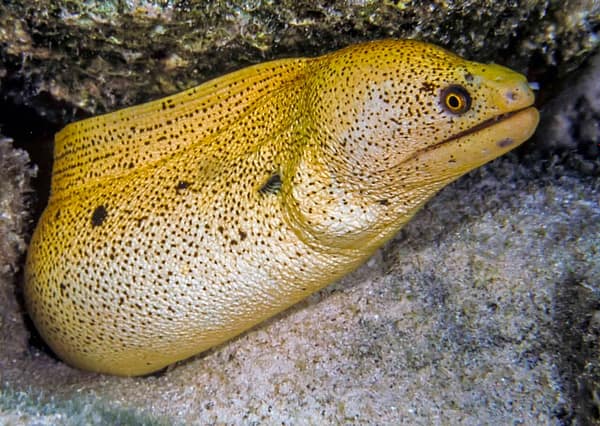 The Golden Banana Moray Eel comes from the reefs that lie off the shores in South America and can attain a length of 2 feet in the wild. Its coloring is beautiful yellow while its body appears strong and muscular like the majority of morays. Its identical species to the Fire Coral Eel, but in its extremely uncommon yellow color.

Typically, Golden Banana Moray Eel is found as a juvenile and is just a few feet in length. This Golden Moray Eel is also an escape artist and may try to break through small gaps in the lid of an aquarium. Because of these features and the fact that it can cause severe bites it is recommended that the Golden Moray Eel should not be kept by the majority of aquarists.

The diet of the Golden Moray Eel should consist of fresh fish as well as all meaty food items.

The Banana Eel is one of the smallest species of Moray that belong to the Muraenidae family. They come in numerous varieties and can be found in various regions of the globe however, they are more prevalent in coral reefs of tropical regions.

Like the name suggests the Gymnothorax miliaris has a slender snake-like body and bright yellow hue of a ripe banana across the entire length of its body. They also have black marks on the top of their body and also on the dorsal fins.

Morays don’t have scales. Instead, they have extremely tough and robust skin that is covered with mucus that helps keep them free of parasites and bacteria.

Banana Eels have beady eyes with poor vision, making it difficult to locate prey, however, they possess an exceptionally keen sense of smell that allows them to hunt effectively.

They’re semi-aggressive, with modified mouthparts that have sharp teeth that can result in severe bites, which makes them incompatible tankmates with the majority of aquatic species since they are carnivores. They may take on smaller fish.

The majority of Morays such as the Banana Eels, always have their mouths open, which lets them breathe and perform their respiratory functions.

They aren’t suitable for beginners, and should be used only by the more experienced fishkeeper.