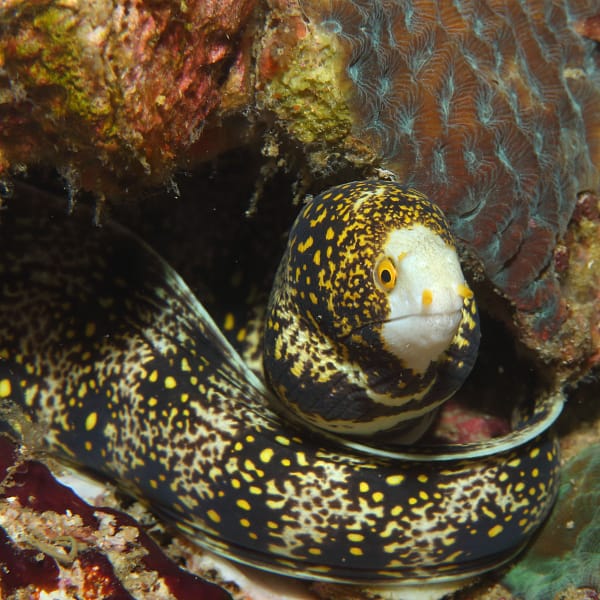 The Snowflake Eel, also known as the Snowflake Moray Eel, Clouded Moray, or Starry Moray is among the most stunning morays and is found in caves and crevices across all of the reefs that make up the Indo Pacific. When in the wild, it could be 39 inches long and most specimens in captivity do not exceed 24 inches.

This is a very tough sea eel but also it is also an escape artist. A 50 gallon or bigger aquarium that has lots of live rock and a well-fitted canopy is the best choice. A majority of the eels which disappear from aquariums are due to leaky seals in tanks. The Snowflake Eel is safe to be housed with any fish it is not able to swallow easily. It can be housed alongside certain invertebrates such as corals and anemones, but not with crustaceans.

Wild Snowflake Eel can be described as a nighttime predator that is known for its ambush of crustaceans and fish. In tanks, it will consume frozen or freeze-dried krill shrimp, fish, and the majority of meaty meals. It is possible to teach it to feed on its own, however, it should be done cautiously because it could result in an unpleasant bite.

It’s a very tough sea eel but also it’s also an escape artist. A 50-gallon or bigger aquarium that has lots of live rock and a snug-fitting canopy is the best. A majority of the fish that go missing in aquariums are due to tanks that are not sealed properly. It could be kept with various invertebrates, such as corals, anemones sea urchins. Additionally, other aggressive fish like tangs, lionfish, and triggerfish are appropriate to be tankmates. Incorporating the same species into tanks is feasible only if they are introduced to the tank in the same manner and there is enough room and shelter. Smaller fish are more likely to be eaten by eels.

They are able to grow rapidly within a relatively short amount of time, which is why it’s logical to buy tanks that are large at the beginning. A 50-gallon or bigger aquarium is required for snowflake eels’ lives. Because they love to get into rocks, ensuring ample rock in your tanks will allow them to adjust to your tank. They also like caves.

The principal food sources that are found in the ocean include crustaceans such as krill, shrimp, and fish that can fit into their mouths. Lobsters and crabs are their main food source. In the wild, Snowflake Eel can be regarded as a nighttime predator that is known for its ambush of seafood and other crustaceans. In tanks, it will eat frozen or frozen-dried krill shrimp, fish, and most meaty food items that are packed with vitamins. It is possible to teach it to feed on its own but if carried out with caution. It is not advised because they can cause pain with a bite or have poor eyesight. Long tweezers, or tongs, are a good option for feeding them.

If they aren’t already accustomed to frozen food the moray eel will likely require feeding in the form of live ghost shrimp. Do not feed them goldfish or the rosy reds since it can cause liver diseases.

Indian Pacific: From the Red Sea and East Africa to the Society Islands; south of Japan and the Hawaiian Islands in the north, Lord Howe Island in the south; and throughout Micronesia.

Eastern Pacific: Southern of Lower California, Mexico, and Costa Rica to the north of Colombia.

It can also be found throughout also the Southeast Atlantic.