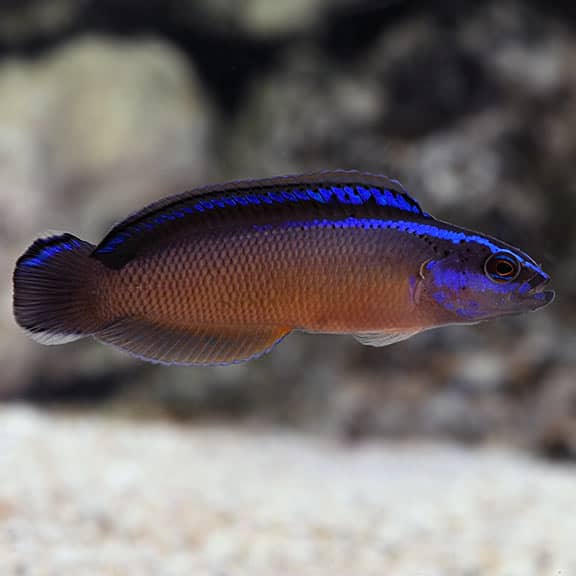 Captive-Bred Black Neon Dottyback appears to have a nearly perfect mix of phenotypical traits from its predecessors, sporting the distinctive face bands of the Springeri Dottyback and the horizontal blue stripes that are affixed to the dorsal length as well as the fins of Neon Dottyback.

At first look, it appears that the Captive-Bred Black Neon Dottyback appears to have that body color of Springeri Dottyback but demonstrates a distinctive ability to change color on its flanks. It can change its body color from jet black to a rust hue depending on the mood and the environment.

The Black Neon Dottyback inherited traits from both species’ parents. It can change color depending on mood and environment. Its flanks, turn from almost Jet Black to a dark rust shade. Small fish with slim bodies that allow them to move into and out of the rockwork in a rapid manner. In the wild, they wait in their hole for passing food. They need plenty of rocks. They are ideal for reef tanks and can take the majority of fish food, however, they must be among the fish that is introduced last in the tank. One fish should be kept in each tank. Dottybacks are small, colorful basslet-like fish that live in the caves and crevices of coral reefs. Dottybacks are able to be kept in smaller aquariums, but larger tanks that contain lots of live rock are ideal. They are territorial, and defend the territory they’ve claimed as their home with a lot of force. Dottybacks can be housed in a variety of locations based on the capacity of the tank as well as the number of hiding spaces available. There has been some success adding several dottybacks to the tank simultaneously, which gives each an area to defend without giving advantages to anyone. Once a dottyback is familiar with a tank, it can be difficult to introduce another without fear of being threatened. Dottybacks are diverse species with regards to aggression. caution should be taken when deciding on which species to introduce to the reef aquarium community. They tend to remain in their cave or crevice until the time comes to feed. Their colors are usually striking and they are in a position to change their sexuality. After eggs are laid, males are known to grab eggs using their mouths to ensure they are alive.