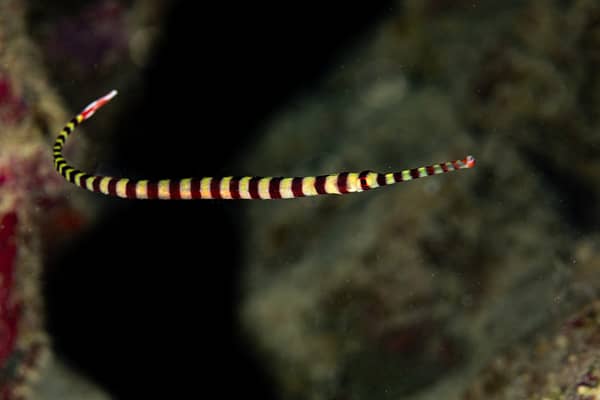 The Yellow Multibanded Pipefish is a kind of reef pipefish, also known as a flagtail pipefish. It is a more powerful swimmer than its seahorse counterparts and is rarely in contact with the substrate directly. In the wild, it can be located under overhangs of rocky rocks or corals. It can also be found close to the surface of its habitat for reefs.

The Yellow Multibanded Pipefish has a slim, long body with an incredibly small tubular mouth and an oval tail that resembles a flag. Its body color is yellow, with bright red-to-maroon vertical bands that run from the head to the tail. The tail is bright red, with white tips and a yellow dot in the middle.

The yellow multibanded Pipefish typically prefers eating only live copepods that are in an aquarium that is mature and has lots of macroalgae and live rock. The ideal diet to start the fish off with would be Nutramar Tigrio Bottled Live Copepods and vitamin-rich live brine shrimp that are baby, however, live brine for babies shouldn’t constitute the bulk of its diet. As time passes this Yellow Multibanded Pipefish may become familiar with taking frozen CYCLOP-EEZE and small Mysis, Nutramar Ova.

Are you looking for the most nutritious food source to feed your Pipefish? We suggest the AlgaGen Tisbe biminiensis.

After a lavish courtship dance and courtship ritual, the female will join her eggs with adhesives to the flat surface beneath the trunk of the male. Couples will often mate in an aquarium if they are well-fed. It’s not easy to identify gender, but mature males usually appear flat because of the brood patch and females are more round.

This species of social interaction is best kept in pairs or in groups of its own type in an aquarium of 50 gallons or greater. It can be kept in conjunction with shy, small fish like tiny seahorses, gobies, dragonets, or firefish. Aggressive, territorial, or fast-moving fish don’t make great friends. Pipefish are harmed by corals that have tentacles that sting, or corals that have enough size to eat them, like brain corals. Pipefish are also harmed by invertebrates like crabs as well as large shrimp.

We assure you that ALL the aquatic species we provide will be alive and in good shape. However, due to the higher degree of attention required for this specific species, it was classified by the zoo as “Expert only.” This species is suggested only to the aquarist who is an expert or zoo institution. Expert only aquatic life is not covered by our warranty after arrival.