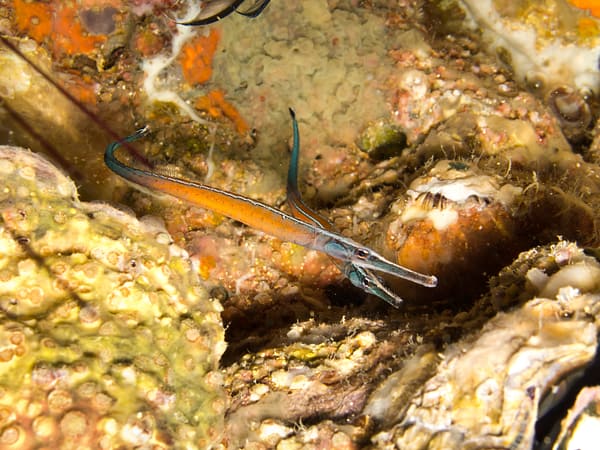 The Janss’ Pipefish a kind of reef pipefish, also known as flagtail pipefish. The fish is a better swimmer than its seahorse counterparts and seldom comes into directly contact with the surface. In the wild the Janss’s Pipefish is often found swimming beneath corals, under overhangs of rocky rock and close to the reef’s floor habitat. It plays the function of a cleaner fish. It is known to feeds on parasites and dead tissue of damsels and cardinalfish. The Janss’ Pipefish can also be able to clean other kinds of fish in aquariums.

The Janss’s Pipefish has a long, slimmer body, with an elongated tubular mouth, and an oval tail that resembles a flag. Its body color is orange and the head and the front portion of the body are blue. Its tail color is dark, with white lines and a dot in the middle.

The Janss’ Pipefish typically prefers eating live copepods that are in an older reef aquarium that has lots of macroalgae or live rock. The ideal diet to start the fish off with would be Nutramar Tigrio Bottled Live Copepods as well as vitamin-enriched live brine shrimp that are baby, but live brine shrimp shouldn’t constitute the major portion of the diet. In time the Janss’ pipefish will become accustomed to eating Frozen CYCLOP-EEZE as well as smaller Mysis as well as Nutramar Ova.

Looking for the perfect food for your Pipefish? We suggest algaGen Tisbe biminiensis.

After a lavish courtship dance after which the female will attach her adhesive eggs to the flat surface beneath his trunk. Couples will often mate in aquariums if they are fed well. It’s not easy to identify gender, however mature males generally appear flat because of the brood patch and females tend to be more round.

This social species should be kept in pairs or in groups of its own species in an aquarium of 50 gallons or greater. It is possible to keep it with shy, small fish like small seahorses, small gobies dragonets, and firefish. The aggressive, territorial, or fast-moving fish don’t make ideal friends. Pipefish can be injured by corals that have tentacles that sting, or corals that have enough size to devour their brain corals. Pipefish are also harmed by other invertebrates, such as crabs as well as large shrimp.

We are able to guarantee that ALL aquatic species we provide will arrive in good health. But, due to the higher degree of maintenance required for this particular species, it is classified as “Expert only.” This species is only recommended to the aquarist who is an expert or zoo institution. Expert only aqua life is exempt from our warranty after arrival.

The Janss’ Pipefish is a species of reef pipefish, also known as flagtail pipefish. It is a more powerful swimmer than its seahorse counterparts and is rarely in contact with the substrate directly. In the wild the Janss’s Pipefish is often found floating in rocky overhangs, corals or near the reef’s floor habitat, where it plays the job of cleaning fish. It eats parasites and dead tissue of cardinalfish and damsels. The Janss’ Pipefish can also be able to clean other kinds of fish in aquariums. The Janss’ Pipefish is an extremely long, slim body, with an elongated tubular mouth, and an oval tail that resembles a flag. The body color is orange, while the head and the front portion of the body are blue. Tail is black, with a an white border and a dot in the middle. After a lengthy courtship dance in which the female attaches her eggs that are adhesive to the flat surface beneath the trunk of male. The pair can be seen regularly mating in an aquarium if they are well-fed. It’s difficult to tell the gender, however mature males usually have a flattened look due to the brood patches and females tend to be more round. This species of social fish is best kept in or in groupings of its own in a large or medium aquarium. It can be kept in conjunction with shy, small fish like tiny seahorses, gobies, dragonets and firefish. The aggressive, territorial, or fast-moving fish don’t make great friends. Pipefish are not good with corals and anemones with tentacles that sting, or corals that can be large enough to devour them. Pipefish are also harmed by invertebrates like large shrimp and crabs.