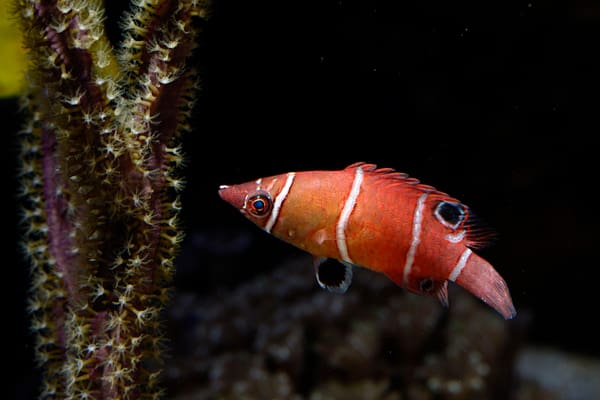 The Banded Possum Wrasse is also called the Pygmy Wrasse or the Arrowhead Wrasse and is thought to originate in the oceans of Indonesia. This Banded Possum Wrasse has an appearance reminiscent of an arrowhead and is mostly orange/red in color. It has yellow vertical stripes during its juvenile form. As the fish matures, the color will darken and turn to a deep, rustic hue. Males and females in this kind of fish are alike in color. However, when they’re courting, the male exhibits a greater intensity of color. Colors can differ based on the mood of the fish.

It is believed that the Banded Possum Wrasse is an extremely calm active fish that can add color and energy to a reef or fish-only aquarium that is 10 gallons or greater. They are not a nuisance to corals or other invertebrates which makes them the perfect fish to keep in the reef aquarium. One male could be kept in females in a group that is introduced before or in the same manner as the male. They are known to jump, therefore the use of a sturdy canopy is advised.

The diet of the Banded Possum Wrasse should include vitamin-rich frozen mysis shrimp, vitamin-enriched brine shrimp frozen in brine, and other meaty meals, along with the highest quality seafood flake, and marine pellets.

The Banded Possum Wrasse (Wetmorella nigropinnata) originated from the waters of Indonesia. It has an appearance similar to an arrowhead and is red/orange-colored with vertical stripes of yellow when in its juvenile coloring. As the fish grows older, the color will darken and turn to a deep rust color. Males and females in this kind of fish are similar in color, however, when they are courting, males will display increased colors. Colors can change based on the mood of the fish. The Banded Possum Wrasse is a very calm active fish that can add color and energy to a reef or fish-only aquarium. They are not a nuisance to corals or invertebrates, making them the perfect fish to be kept in the reef aquarium. A single male is kept in an assortment of females who are introduced before or even at the same time in the same manner as the male. These wrasses like to jump, which is why the use of a sturdy canopy is suggested.