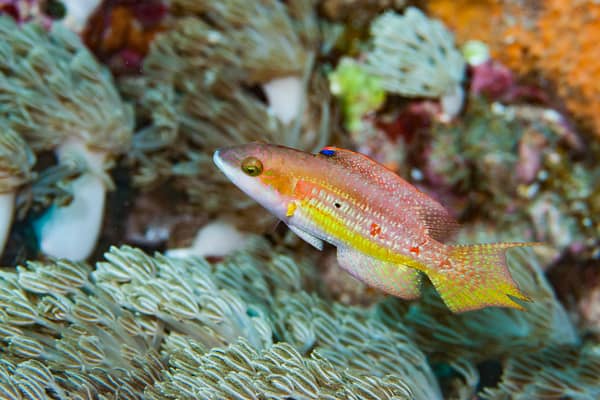 The Two Spot Wrasse is considered to be one of the smallest of a group of ornamental wrasses frequently known as Maori Wrasses (Genus Cheilinus and Oxycheilinus). The intricate facial marks that are characteristic of Two Spot Wrasse as well as other Maori Wrasses have been said to be akin to the intricate facial tattoos from those of the Maori indigenous peoples in New Zealand.

Like its name, the Two Spot Worasse is embellished with striking facial marks that are accentuated by two dark spots. Beautiful tomato-red hues blaze brightly across the surface of the Two Spot Wrasse and extend until the caudal fin. This creates an exotic web of pattern and color.

One of the most common wrasses, Two Spot Wrasse exhibits sexual dimorphism. Male Two Spot Wrasse has a rhomboid-like caudal fin usually with a single filament that is elongated and extends out from the top. Contrastingly, the female Two Spot Wrasse is characterized by an oval tail, but no filament. This colorful wrasse is guaranteed to be a vibrant addition to your fish-only marine or Live-Only Fish Rock aquarium.

It is believed that the Two Spot Wrasse is found on the slopes of the outer reef and deep lagoons surrounded by rubble and algae. In order to replicate this habitat, the best setup is an established saltwater aquarium that is minimum 75 gallons and has a live rock aquascape. Make sure to include a huge expanse of substrate that has open areas to swim in.

The Two Spot Wrasse is a fish with a fascinating personality of distinct coloration and behavior. The timid and delicate Two Spot Wrasse is transformed into an incredibly gregarious and hardy fish after completely adjusting to its new surroundings. It is crucial to provide an environment that is stress-free throughout the initial period of initiation. So, keep your Two Spot Wrasse together with other species that are peaceful. When the mature fish is established it can exhibit aggressive territoriality towards other fish. In general, only one Two Spot Wrasse is advised for each aquarium.

The Two Spot is known to consume pyramidellid snails, fireworms and feather dusters, tiny wild crabs, shrimp tubeworms, flatworms and. Diet for Two Spot Wrasse should include mysis shrimp that is vitamin-enriched and frozen, vitamin-enriched frozen brine shrimp, enriched mussel and oyster meat as well as other meaty meals. A Two Spot Wrasse must be fed small amounts of food multiple times every day.

The Two Spot Wrasse is among the smallest species in an array of wrasses with elaborate designs. Like its name, the Two Spot is decorated with striking facial markings with two black spots. The vibrant tomato-red coloration blazes across the surface of the Two Spot Wrasse and extends until the caudal fin, creating an exotic web of the colored pattern. The most common wrasse, the Two Spot Wrasse exhibits sexual dimorphism. Male Two Spot Wrasse is characterized by the rhomboid caudal fin typically with one long filament that extends out from the top. The female Two Spot Wrasse is characterized by the appearance of a round tail without filament. This festive wrasse is sure to make a colorful addition to the fish-only marine or Fish-Only-With-Live-Rock aquarium. The Two Spot Wrasse lives in the reef’s outer slopes as well as deep lagoons that are surrounded by sand and algae. In order to replicate the habitat, the best setup is for this species is an established saltwater aquarium with at least a medium-sized tank. Make sure you aquascape the tank with live rocks. Make sure to include a lot of free-standing substrate and areas that are open for swimming. It is a fish with a variety of distinct coloration and behavior. The timid and delicate Two Spot Wrasse transforms into a gregarious and tough fish after it has fully at ease with its new environment. It is crucial to provide an unrestrained environment for the first few weeks of its introduction. Therefore, you should house this Two Spot Wrasse alongside other species of peace. As the fish grows and matures, it could exhibit aggressive territorial behavior toward other fish. In general, only one Two Spot Wrasse is suggested per aquarium.