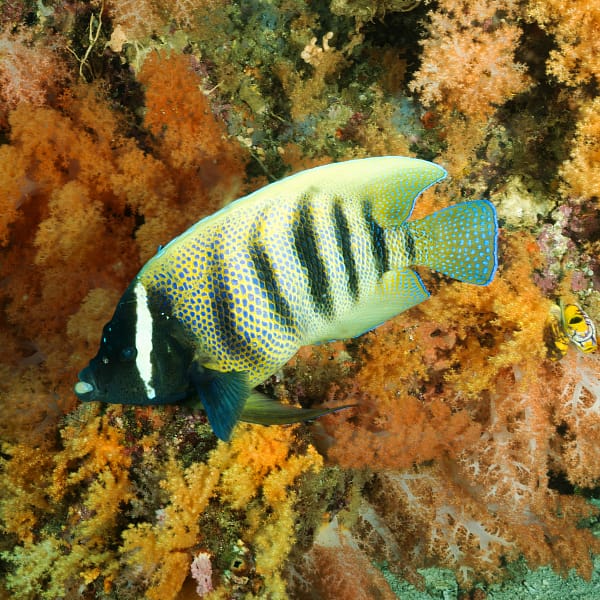 Divers and aquarists know the banded angelfish by its distinctive grunting sounds.

Six Bar Angelfish are hermaphroditic, hard to breed and can be distinguished in color from one another. This fish is big and needs a large aquarium that holds 220 gallons or more. The Six Bar Angelfish is not a reef dweller and will nip at soft and stony corals (sessile insects) and clam mantles.

Six Bar Angelfish needs to eat Spirulina, sea algae, high-quality angelfish preparations and mysis, as well as other meaty items. It should be fed three times per day.

Pomacanthus sexstriatus can be fed in the aquarium with Nori, Spiruli, and small invertebrates like Krill, Mysis, Brine shrimp sponges, and small crabs.

This species is considered reef-safe as a juvenile. Adults are not. Sometimes they like to nibble coral (LPS and SPS), but tubeworms, giant clams and other dangerous creatures are not recommended. Zoanthus is the most popular.

Pomacanthus sexstriatus is a long-legged fish that can grow to 46 cm in length. We recommend keeping them in an aquarium of at least 1500 litres. Place them only in a well-established aquarium. This will allow them to graze on any algae that has grown on the rocks.

Sixbar Angelfish can be difficult to keep. They are difficult to get used to the food. They will often not eat for the first week after they are placed. They can also be shy. If you start with a young specimen, you have the best chance to keep them happy.

This species is not reef safe, as mentioned. These fish should be kept in an established fish-only aquarium. You should provide more than enough live rock between which crevices and holes can be made.

You will have the best chance of keeping them together with coral if you start with a young juvenile six bar angelfish and continue to feed it. SPS corals, hammer corals, bubble corals, and disc anemones offer the best chance of success.