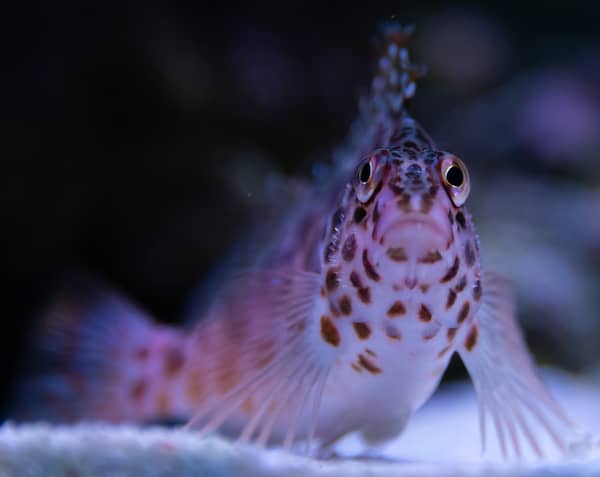 A 30 gallon or larger aquarium is suitable for this tough as well as aggressive species. It can afflict pain on small, calm fish as well as almost any other fish brought into the aquarium once it has established itself. Its tankmates should be bigger than itself, and, ideally, moderately aggressive. It can eat small fish and crustaceans.

It is recommended that the Pixy Hawkfish diet should include different fresh and frozen seafood, frozen meats as well as fresh feeder shrimp.

The Pixy Hawkfish is not to be confused with Cirrhitichthys Aprinus. Pixy HawkfishT has a whitish-blue body and large red spots. An aquarium of medium size is suitable for this tough, and dangerous fish. It is a nuisance to small, tranquil fish and almost any other fish brought into the aquarium once it is established. The tank’s mates must be bigger than the tank itself, and at a minimum, moderately aggressive. It can devour small fish and crustaceans.