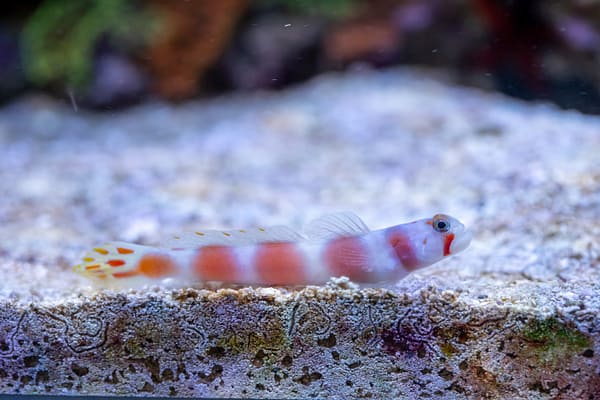 PPinkbar Goby is also commonly known as Shrimp Goby due to the symbiotic relationship that it can have between it and different shrimp. The body of the fish is marked with pink rings and it has a yellowish-colored tail that has sparkling pink dots, that are outlined in blue.

It should be kept in the 10 gallon or greater aquarium that has plenty of coral rubble. It requires plenty of room to swim with a sand bottom to allow for burrowing. It could try to jump out of the tank or any other opening that is small which is why a tightly-fitting lid is necessary. Rarely, it will be aggressive toward other fish, but it will be a bit aggressive towards its own species unless the event of a mating pair.

It feeds on prey in the column of water, however, it will also eat food from the surface as well. Its diet should include mysis shrimp, brine shrimp, table shrimp, and frozen preparations of food for carnivores. It should be fed a minimum of three times per day.

The Amblyeleotris aurora must be kept in an aquarium with plenty of coral rubble. It requires a huge space with a sandy bottom to allow for digging. It could try to leap from the aquarium or other tiny openings therefore a secure lid is needed. Rarely, it will become aggressive with other fish, however, it will be a bit aggressive towards its own species except if they are a mated pair.