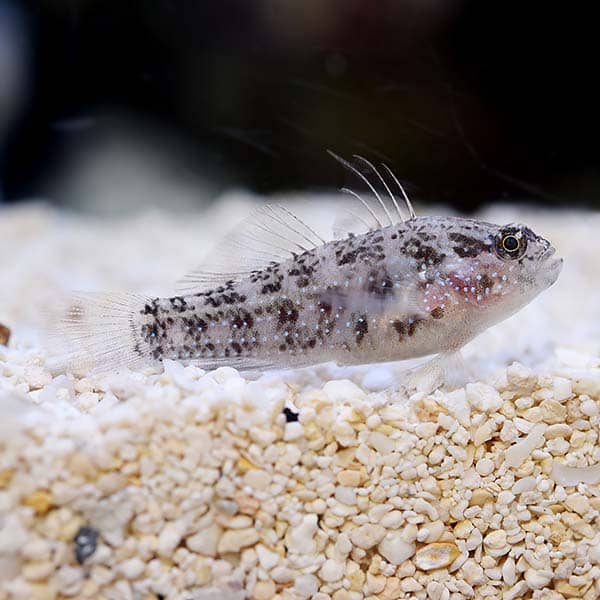 These captive-bred Starry Gobies have a unique advantage over species that are harvested from the wild. They are more durable and familiar with the conditions of home aquariums. They are the perfect choice for newbies as well as experienced aquarists.

The Biota Captive-Bred Starry goby is a tiny, hardy, and beautiful goby that isn’t often accessible in the hobby despite its extensive natural range. In the wild, the Starry Goby is distributed across the Indo-Pacific Ocean from the Persian Gulf and the Red Sea to the Hawaiian Islands from north to southern Japan and south and northern Australia which is where it primarily lives in areas of sand and rubble in shallow protected bays, lagoons, coral reefs, and estuaries that are tidal. Biota Captive-Bred Starry Goby has a stunning, star-spangled look with vibrant blue spots, which adorn an eerie, mottled body shade.

A diet for the Biota Captive-Bred Starry Goby must comprise a range of meaty and plant matter, including mysis shrimp, various frozen meaty foods that are soaked in vitamin supplements phyto- and zooplankton food items as well as flake food. For the best chance of replicating natural feeding conditions, put food in the outlet of an underwater pump or wavemaker, so that it can be dispersed in the column of water. This Biota Captive-Bred Starry goby needs to be fed several small meals throughout the day.

The Starry Goby ( Asterropteryx semipunctatus) is a tiny, robust, tranquil, and easy to care for reef fish that is suitable for any marine aquarium. These captive-bred fish are easy to maintain! They can be kept in pairs as well (in big tanks) in small groups.