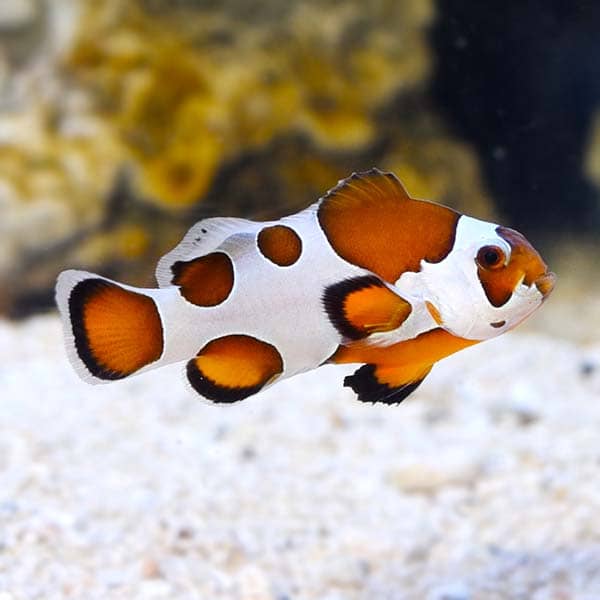 This Orange Storm Clownfish does best when it is kept in an aquarium that is 20 gallons or greater and with lots of rock. It can be a part of a symbiotic partnership with the following anemone species: Carpet (Stichodactyla Sp. ), Sebae (Heteractis crispa), Bulb (Entacmaea quadricolor), or Ritteri (Heteractis magnifica) Anemones. While it is true that the Orange Storm Clownfish does not require an anemone for its survival if you decide to house an anemone make sure the lighting system and aquarium can accommodate the requirements for the anemone that is hosting it prior to including it in your aquarium.

Captive-Bred clownfish have benefits over species that are harvested from the wild. One of them is that they are exceptionally tough and familiar with the conditions of the aquariums of homes. Therefore, they are a great choice for home aquariums. Orange Storm Clownfish makes an ideal choice for both novices as well as experienced aquarists. This Orange Storm Clownfish can be kept alongside a variety of other species of captive-bred clownfish when introduced to the aquarium in the same way.

This Orange Storm Clownfish, like the other species of captive-bred clownfish, can be bred in a home aquarium with ease and is among the most popular “starter” fish that are suitable for breeders of saltwater fish. Females are the bigger of the two and the two fish usually remain near each other inside the fish tank.

The Orange Storm Clownfish can be described as an egg laying fish and typically deposit eggs on a surface close to the bottom of an anemone host. It will also defend the eggs from tankmates. The eggs are usually born in between 6 and 11 days, based on the temp. The fry needs to be raised in separate tanks with a diet consisting of the rotifers and baby brine shrimp.

The Orange Storm Clownfish requires fleshy foods and some greens to supplement their diet. A premium marine flake food that is rich in spirulina algae and frozen and freeze-dried food items are readily accepted.

The Orange Storm Clownfish is an orange and white variant from the Black Storm. It took seven generations to breed the Black Storm with the classic orange and white Ocellaris in order to eliminate any black altogether and to replace them with bright orange. Similar to other clownfish of the ocellaris These Storms generally are calm and easy to care for. They can be at home in a large assortment of anemones, including the well-known Bubble Tip Anemone.