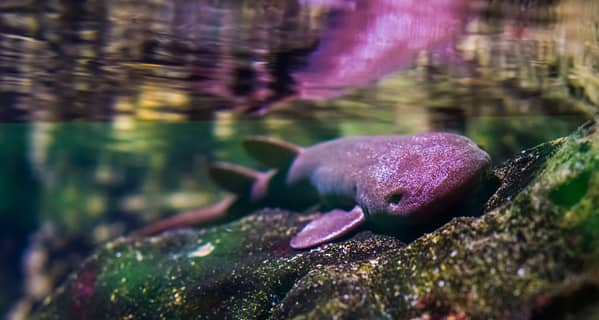 ORA®Snapty-Bred Short Tail Shark is a remarkable accomplishment in aquaculture. It was not known much about the breeding patterns or reproduction habits of the Short Tail Nurse Shark until the recent successes of ORA. The Short Tail Nurse Shark is an oviparous (egg layer) species that has eggs that require approximately 165 days for them to hatch. It is somewhat subdued in appearance, with a uniform brown/tan coloration throughout and a lighter underside. It is a large and blunt-shaped head that has tiny eyes and small nasal barbels. The common name is the distinct aspect of its precaudal fin being shorter than the body and head length and having a small caudal fin less than one-quarter of its length.

Found in the Western Indian Ocean, in shallow waters and coral reefs across the shores of Africa from Tanzania to Kenya and in the vicinity of Madagascar. Madagascar. It is recognized as being the smaller part of the Nurse Shark Family. The tropical species is well-adapted to the coral reef and has extremely tough skin, which can be advantageous when maneuvering in and around coral reefs with rough structures. The ORA Short Tail Nurse Captive-Bred Shark can live for several hours without water, possibly due to the changing levels of water at low tide.

The ORA short-tail nurse shark is thought to be an expert-only animal. Set up a well-filtered and highly-oxygenated aquarium of 200 gallons or more in size, with clean conditions of the water. Carefully chosen tank partners to ensure long-term achievement. Give an ORA Captive-Bred Shorttail Nurse Shark, a low-stress environment that is not disturbed, and avoid exposing it to copper-based medicine. The ORA Captive-Bred Short Tail Shark is nocturnal, which means it is most active in the evening. The slow-moving shark is usually not active, usually spending its time on the bottom or finding refuge in crevices or caves during the daylight hours. It is interesting to note that the ORA Short Tail Nurse Captive-Bred Shark is often found lying on its back, or even upside down for a long duration!

It has a feisty appetite and must be fed the freshest food that is available during the times when the shark is active, which is usually around sunrise and sunset. In the event that the ORA Captive-Bred Short Tail Shark is observed in the aquarium in the daytime, the shark should get fed more.

Its diet should consist of tiny pieces of cleaned fresh fish that is vitamin-enriched raw shrimp or squid as well as scallops, clams, and squid.

Please note that we assure you that ALL aquarium species we sell will arrive in good shape. However, due to the greater degree of maintenance required for this particular species, it was classified as “Expert only.” This species is suggested only for aquarists who are experts or zoo institutions. Expert-only aqua life is exempt from our guarantee for a period of time after their arrival.

Meet the smallest of the Nurse Shark Family! The Nurse Shark with a short tail is a species of tropical reef that is found within the Western Indian Ocean along the coast of Africa from Tanzania to Kenya and in the vicinity of Madagascar. Madagascar. The name they are commonly known by refers to the distinct feature of their precaudal fin being shorter than the head and body length, and having the tiny caudal fin that is just less than quarter their length. They have a large and blunt-shaped head. They also have extremely small eyes and tiny barbels on their nasals.

Feed a diet with fresh seafood, including shrimp or squid, scallops, and clam.