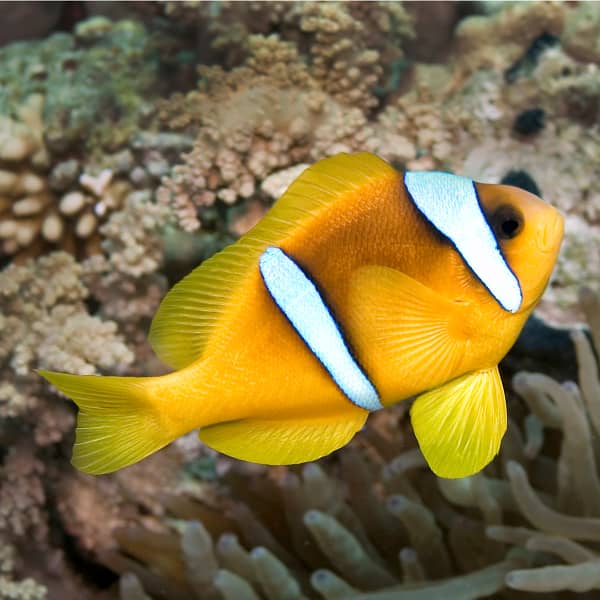 The ORA® Captive-Bred Red Sea Two band Clownfish is also called The Red Sea Anemonefish, ORA’s broodstock originates from the reefs of the Red Sea. As a part of the Clarkii complex, it has mustard yellow to rusty orange coloration, with two white bars that are located at the mid-body and head. The fish is gaining a reputation among hobbyists of all levels as their most favored fish because of their distinctive swimming pattern, which appears to move between the water and up. The Red Sea Two Banded Clownfish can live in captivity up to 20 years.

The Red Sea Two Banded Clownfish is one of the most energetic clowns, bringing energy and a personality to any saltwater tank. An aquarium of 30 or more gallons that contains an anemone is ideal. It is semi-aggressive to other Clownfish Damsels, Clownfish, and other inactive tank partners. For this reason, it is recommended to introduce these fish at the end of the aquarium.

It is believed that the Red Sea Two Banded Clownfish diet includes almost all meaty food items and herbivore-based preparations.

This Two-Band Clownfish is a member of the Clarkii complex. They range from mustard yellow to rusty-orange in color with two white bars in the mid-body and on the head. There is no band at the bottom of the large lyre tail. They can grow to a maximum of approximately 4 inches. A. Bicinctus can become territorial once they grow older, so having more than two fish in one tank is not advised.

They are incredibly attractive with a swimming pattern that appears like they’re “bobbing across the water”. This characteristic has earned them the attention of all levels, as their most favored clownfish.

This Two-Band Clownfish is found in the Red Sea and is rarely encountered in the aquarium trade. They are able to live for over 20 years in captivity.