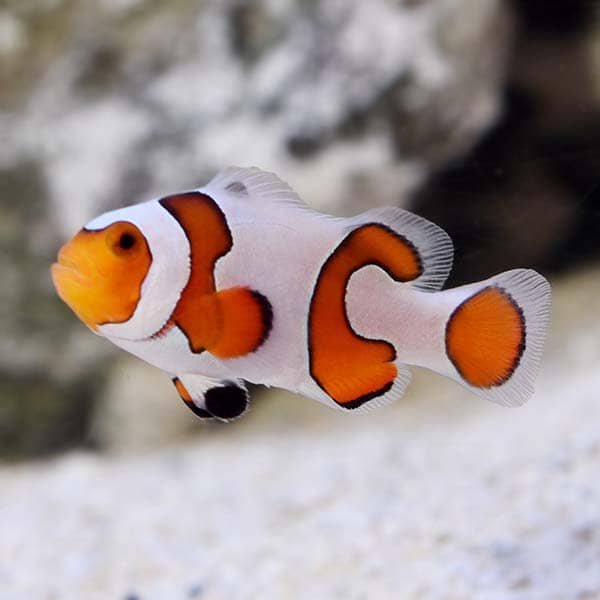 ORA® Oceans, Reefs, and Aquariums Premium Gladiator Clownfish, also known as DaVinci or Fancy Clownfish, are beautiful shades that belong to this species of Ocellaris Clownfish discovered and named by the legendary breeder Bill Addison. What differentiates this particular species from other Ocellaris Clownfish is the prominent white bands that curve upwards and blend together in the shape of brush strokes. Contrary to Snowflake Ocellaris Clownfish that demonstrate similar levels of white coloring, but in a chaotic and random pattern, the stunning Premium Gladiator Clownfish retains the orange hue in clean broad blocks, that are beautifully traced with black striping.

What makes ORA®’s Premium Gladiator Captive-Bred Clownfish so attractive is the higher amount of white coloring to create a dramatic impact. Furthermore, the fact they are captive-bred to save the world’s fragile reefs provides marine life that you can be confident about buying.

The Captive-Bred Ocellaris clownfish can be kept together with other captive-bred clownfish in the event that they are introduced to the aquarium in the same way.

The Captive-Bred Ocellaris Clownfish is also easily bred in your home aquarium. Females will be the biggest of the pair, as the pair typically stay close to one to each other in the aquarium. The Ocellaris clownfish, Captive-Bred, is an egg-laying fish. It will lay eggs onto a smooth area and protect the eggs from tankmates. The eggs are usually born in between 6 and 11 days, depending on the temperature of the water. The fry need to be raised in separate tanks eating a diet of rotifers, followed by the baby brine shrimp. The Clownfish is a ferocious eater. It can eat most meaty and frozen herbivore dishes.

The Premium Gladiator Ocellaris Clownfish has elegant lines that are smooth and curvaceous over the bright orange body. The pattern may or not be uniform on both sides and the markings may differ. The fish could display a helmet design and distinct white patterns.

This Premium Gladiator Ocellaris is an extremely popular fish that can be able to coexist alongside different Clownfish within the same tank according to how big the tank is. It was also among the very first fish species in the marine aquarium to be successfully bred in the wild. They thrive in aquariums and are extremely tranquil.

The clownfish does not require an Anemone to live but will take a variety of Anemones as its hosts and even corals. Their most preferred Anemones include carpet Anemones Stichodactyla Gigantea and the magnificent Anemone Heteractis Magnifica.

Clownfish have a distinctive swimming style that is distinct from the majority of fish. This could be passed on by their genetic makeup resulting from years of wiggling in their tentacles Anemones. While the Clownfish is twirling within the tentacles that sting, the Anemone’s mucus may be spread over the body of the fish and shield it from further injuries.

In the wild, they live in small groups that include one dominant female of a large size with a smaller but physically active male and a couple of juveniles and males who are smaller. When the female is gone, the male with the biggest size will switch sex, and then change into the dominant female, with the remaining Clowns ascending the ladder to follow behind the dominant female.

They will eat the majority of fish food and are ideal for aquariums with reefs. Multiple fish can be kept in one tank and they like to be in groups.