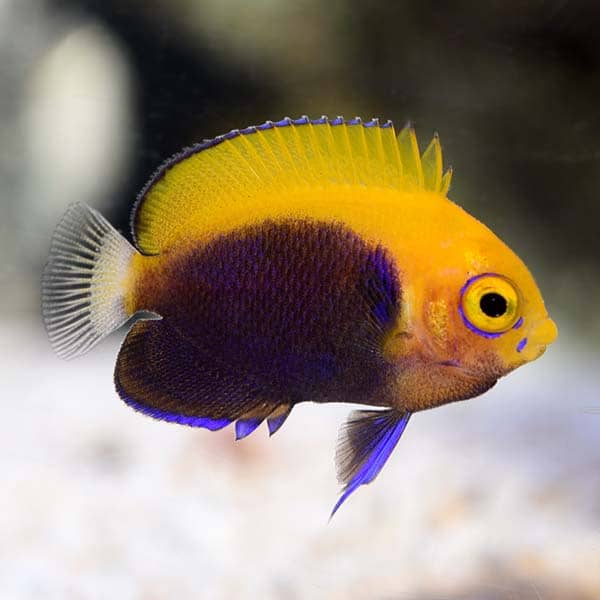 The ORA® Captive-Bred Flameback Angefish Also called an African Pygmy Angelfish or Orangeback Angelfish is a striking contrast of orange-yellow and blue colors. While the body is predominantly blue, there’s an extensive and vibrant orange yellow colors swatch running across the head from the back, all the way to the dorsal fin. The caudal fins are yellow and a bit transparent, which makes it distinct against its cousin, the Brazilian Flameback Angelfish (also known as the Fireball Angelfish – Centropyge aurantonotus).

The ORA® Captive-Bred Flameback Angefish requires a minimum 55 gallon tank, with plenty of hiding spots as well as live rock to graze. At times, the fish might nip at SPS and a few varieties of corals found in the aquarium for reef fish.

The diet of the Flameback Angelfish should include Spirulina and marine algae, premium angelfish products, mysis, frozen shrimp, and various other fleshy meals.

This ORA® Captive-Bred Angefish is unique in comparison to wild-harvested species. Captive-Bred angelfish are extremely durable and are more accustomed to the conditions in aquariums that are used in homes. This makes them the perfect choice for newbies as well as experienced aquarists.

This fierce little gem is among the smallest members of Centropyge family. All the dwarf-dwarf or Pygmy Angelfish belonging to the Centropyge species are among the hardiest of the whole Angelfish family. They’re very like in appearance and color with the Brazilian Flameback Angelfish (Centropyge aurantonotus). The main difference is the yellow, light colored caudal fin of African Flameback Angelfish. These fish are the best for reef tanks in the genus, however caution should be taken when introducing them into tanks with brains that are meaty corals, such as Cynarina spp. or Trachyphyllia spp. African Flameback Angelfish are not famous for picking at mantles from clams but caution is recommended. They can occasionally defend or chase their territory against other non-sessile vertebrates such as crabs or shrimp, but they will generally leave these invertebrates unharmed.